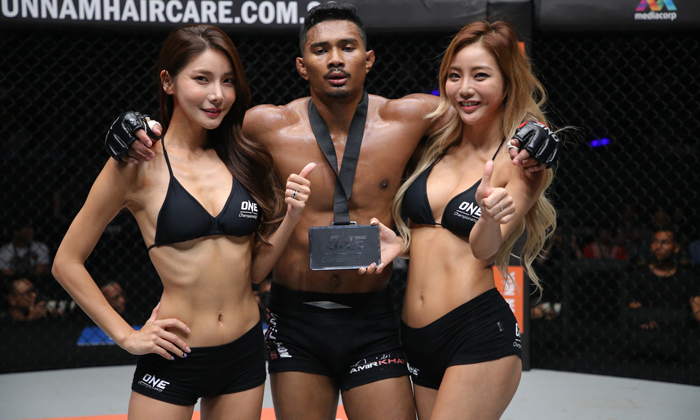 On 23 November 2018, the Mall of Asia Arena in Manila, Philippines will witness the crowning of a new ONE Lightweight World Champion as former titleholder Eduard “Landslide” Folayang will battle it out with Singapore’s own Amir Khan at ONE: CONQUEST OF HEROES.

Khan already holds the record for most wins and stoppages inside the ONE cage – a spectacular feat for a 23-year-old – and will look to add to his long list of accomplishments by winning gold in his very first opportunity at a world title.

In 11 career wins, he has eight knockout victories and two submissions. He can be methodical in breaking down his opponents, but at times, he just needs one flurry of strikes to finish off his opponent quickly.

Check out the fastest knockouts of his career.

Introducing His Power to the World

Khan made his debut with the promotion aged 19 in September 2014 at ONE: RISE OF THE KINGDOM, which was held at the Koh Pich Theatre in Phnom Penh, Cambodia.

It didn’t take long for him to show off his incredible power, knocking down his Malaysian foe, Jian Kai Chee, within seconds of the bout. While Chee was able to recover and create distance from Khan, the Singaporean was relentless in putting pressure on him.

Khan took the match to the ground and transitioned from side control to full mount, but the Watcharachai Muay Thai Academy product was able to roll away from trouble and get back to his feet.

Just when Chee was getting in some offense, Khan unleashed a powerful left hook that rocked his opponent. Khan saw the opening for a finish and pounced on his stunned opponent until the referee put a stop to the contest at the 2:25 mark of the opening round.

It was an impressive win for the young man’s promotional debut, but it was just the start of a dominating run.

A Home Debut To Remember

Barely two months after his ONE debut, Khan had his first match on home soil for ONE: BATTLE OF LIONS in the Singapore Indoor Stadium in November 2014.

Pakistani warrior Waqar Umar stood in the opposite corner, and he was willing to trade strikes with his younger rival early in the contest.

As Khan stalked his opponent, he unleashed an inside leg kick, which caused Umar to drop his guard to try to call the attention of the referee to signal a low blow.

It was a crucial mistake, as the referee urged them to go on – something that Khan didn’t need to be told. He clinched up with his opponent and threw elbows to Umar’s temple. Seconds later, the Pakistani was flat on his back while Khan was celebrated to the cheers of his home crowd.

With an official time of 1:25 of the first round, it was Khan’s fastest knockout to date.

In May 2017, the young lion was back in the Singapore Indoor Stadium for ONE: DYNASTY OF HEROES, his first match of the year.

Rajinder Singh Meena was his rival this time around, as he made his way back to ONE after competing in India earlier in the year. Both men entered the cage with a 100 percent finishing rate, making for a match that almost guaranteed a stoppage.

Khan displayed his quickness early on, stepping in and out to attack, but a kick from the Singaporean striker was caught by his opponent, and Meena looked to take the bout to the ground, but he was not quick enough to capitalize.

That was the beginning of the end for him, as Khan countered with a barrage of knees, elbows, and punches that had the crowd roaring. He forced Meena to the ground, and started dropping bombs on his opponent, leading the referee to stop the contest at the 1:29 mark of the first round.

The win was Khan’s fourth of a six-bout winning streak – the longest in his young career so far.