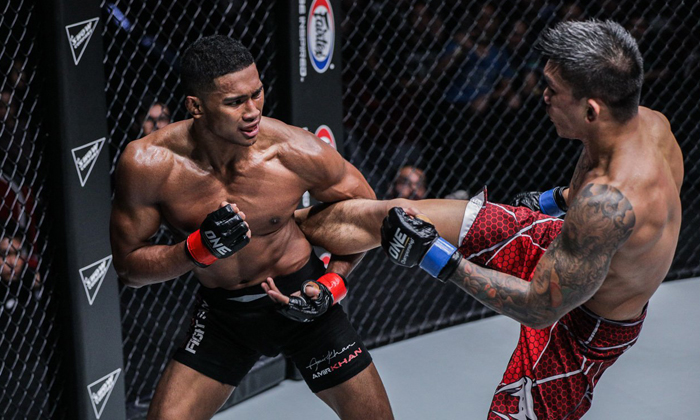 Back in 2015, Amir Khan Ansari was an up and coming fighter in Singapore's Mixed Martial Arts (MMA) scene, now the 22-year-old describes himself as "the best Singaporean fighter right now."

When asked to elaborate why, he replied, "No one has the amount of experience I have and my credentials speak for itself. I knock all my opponents out and no one has reached that stage yet."

"The last 2 years have been nothing but hard work and dedication and I definitely proved it in my last couple of fights," added Amir.

Amir currently holds the record for the most number of knockouts in ONE Championship history.

Despite his quick ascent to the top, there were obstacles which he had to overcome to get to where he is today.

In secondary school, he was bullied.  While 'it was obviously not a good experience', Amir added that he learnt from it and that it changed him, making him the person that he is today.

He also has tourettes, a neurological disorder that causes involuntary twitches and spasms.

His tourettes has slowly mellowed over the years and he attributes that to MMA, which has enabled him to be in better control of his condition.

Recently, he completed his National Service and is now doing MMA full-time with supportive parents behind his back.

He is co-headlining the ONE Championship 'Immortal Pursuit' event with his fight against Adrian 'The Hunter' Pang on Nov 24 at the Singapore Indoor Stadium.

What's next for Amir?

He has set his sights on being the first Singaporean to get an MMA world title and hopes that he will get 'at least one lightweight title belt' by next year.

Watch how Amir Khan prepares for his upcoming fight in the interview that we did with him below.