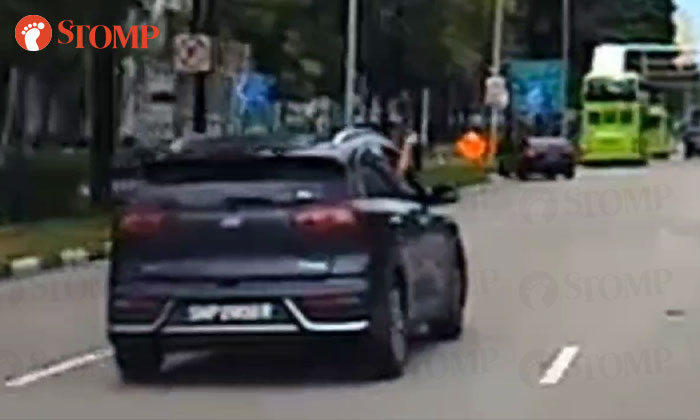 A driver was caught on video flashing the middle finger after cutting across three lanes along Punggol Central on Tuesday (June 21).

A Stomper shared footage of the incident that happened at around 3pm.

He shared that the Kia car driver drove across three lanes and almost caused an accident.

"He sped off and rolled down his window to point his vulgar middle finger despite it being his own reckless fault," he said.

"He changed lanes without signalling in front of my car again and deliberately braked multiple times abruptly despite a clear empty road ahead in an attempt to cause me to hit him in the rear intentionally.

"He then stopped at a red traffic light junction at Edgefield Plains and aggressively shouted vulgarities from inside his car.

"I offered to stop his arrogant nonsense to come and resolve the matter at the road side ahead, near the Punggol police station where we can bring both our dash cams to dispute whatever he wants and we both agreed.

"Upon green light the champion driver made another traffic offence by making an illegal U-turn at the junction of Edgefield Plains near Punggol Secondary School and fleed."