Rider flashes middle finger, argues with driver after getting honked at for going against traffic 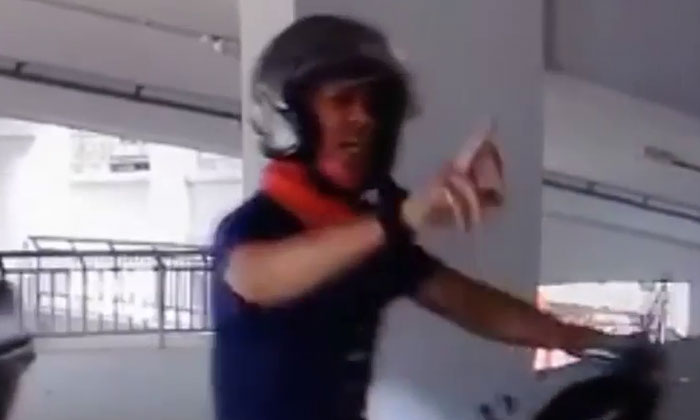 A rider was caught on video riding down a ramp meant for vehicles going up at a multi-storey carpark.

When a motorist honked at him and shouted at him for going against traffic, he made a U-turn to argue with the driver.

In the video shared by SG Road Vigilante, the driver is heard saying: "So lazy until like that ah? If accident how?"

15apr2022 #FBQ5308S yamaha aerox going against flow of traffic at mscp . got horn by camcar & uturn back to argue quoted ride down from opposite direction in carpark. Almost cause an accident and still can argue and point middle finger https://youtu.be/JYpTTOYt3Q4

The motorcyclist responds but his voice is not picked up by the carcam.

He then points his middle finger at the driver before riding away.

According to Singapore Uncensored, the rider responded to the incident, apologising for his actions.

"First of all I would like to admit that I am wrong," he said.

"I raised my hand as a gesture to apologise.

"The driver shouted at me even after I apologised twice.

"I couldn’t hear what he shouted hence, decided to turn back and clarify things (not trying to yaya papaya or kpkb).

"Turn[s] out that he shouted non-stop while i was explaining that I was sorry and that I saw he was still far away.

"The video showed me showing a middle finger but didn’t show that he was using vulgar words towards me.

"Not trying to be defensive because I was clearly wrong and decide to move on.

"For those who [cursed] me, said I'm an animal, wishing that the driver bang me until I'm under his car. I have no say in that."