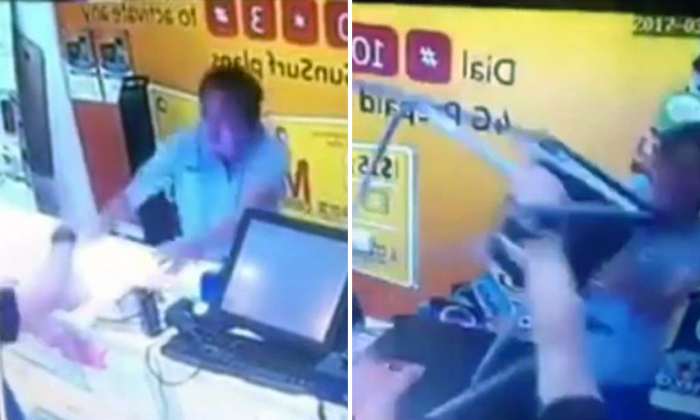 Police are investigating a case of voluntarily causing hurt after a man was caught on video swinging a chair at the staffer and computers in a handphone shop at new Upper Changi Road Block 57.

The incident happened at around 6.30pm yesterday (Mar 26), according to a report on Singapore Uncensored.

The clip, shared on Singapore Uncensored and All Singapore Stuff, shows a man slipping and sliding on the counter while tussling with the staffer behind the counter at the handphone shop.

The man gets thrown of the counter, but gets back up and throws a few punches at the staffer.

He then picks up a chair and smashes the computers with it.

Right after that, he charges the staffer with the chair, while still throwing punches at him.

An elderly man is seen walking into the shop to stop the furious man from attacking the staffer.

A Police spokesperson told Stomp that the Singapore Police Force (SPF) was alerted to a case of voluntarily causing hurt at 6.44pm.

"Police are looking into the matter," added the spokesperson.

While the contributor on Singapore Uncensored said that the man assaulted him for no reason, netizens pointed out that they found this hard to believe.

Common sentiment among them was that something must have triggered the man's reaction.