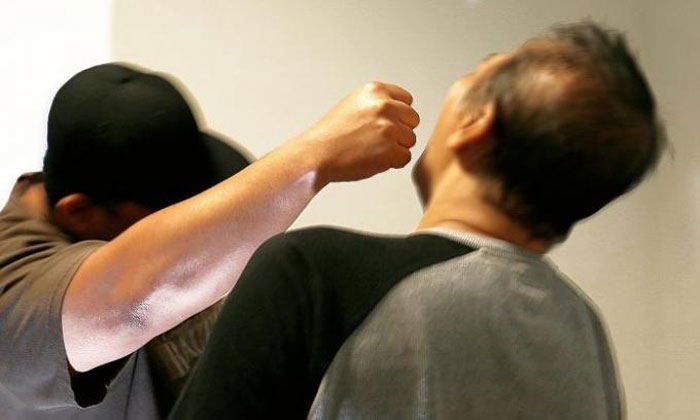 An off-duty manager of a pub punched a patron because he said he felt "kancheong" (Hokkien for anxious) after the victim threatened to call his gang members to the pub in Upper Thomson Road.

But his argument cut no ice with Judge of Appeal Chao Hick Tin who noted that surveillance footage of Talk Cock Sing Song Pub showed the victim was not even looking at Ong Chee Heng when he was hit.

The judge sentenced Ong to two weeks' jail after the prosecution appealed, arguing that the initial sentence of a $4,000 fine was manifestly inadequate. Ong, 31, will start his jail term on April 19.

The victim, Mr Song Chee Kiong, 43, was with his wife and friends.

Following a dispute between the two groups, Mr Song suggested to Freddy Lee Mun Soon, a friend of Ong's, that they go to the pub's smoking room to talk.

There, Lee punched Mr Song on the face several times, with a number of blows landing on his right eye. Mr Song fell and Lee continued to rain punches on his face.

Mr Song was led out of the room by a patron but returned to help his wife, who had fallen in a scuffle with Lee.

Lee hammered Mr Song again and Ong, too, threw a few punches at him. Other patrons eventually separated the pair from the victim.

Mr Song suffered permanent damage to the retina. He faces possible blindness in the injured eye. Lee has compensated him $8,000.

Last November, Lee was jailed for 20 weeks while Ong was fined $4,000 by a district court.

Yesterday, Deputy Public Prosecutor Mohamed Faizal appealed for Ong to be jailed too as it was a case of group violence. He argued that as the manager, albeit off duty, Ong should have stopped Lee.

When Ong was asked why he punched Mr Song, he replied that his English was not good. Justice Chao said he could use Hokkien.

"Scared lor. Fear. Kancheong," said Ong. "It was chaotic. I didn't know how to handle the situation properly in a calm way."