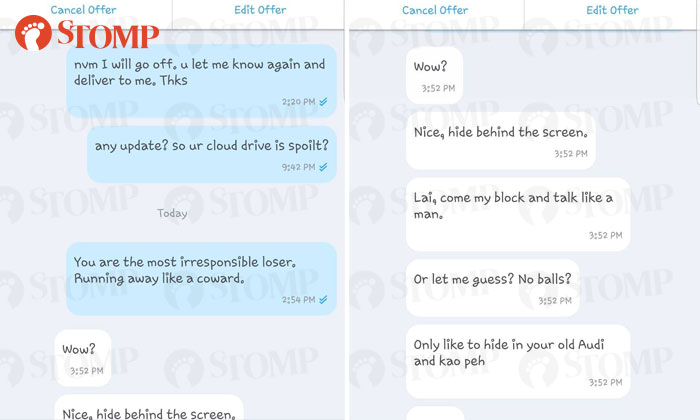 A Stomper was affronted when a seller he met online started hurling insults at him after he confronted the seller for backing out of a deal and going MIA (missing in action).

The Stomper told Stomp in a phone interview that he had been looking for a cloud drive for his personal needs on online marketplace Carousell.

"I didn't need a first-hand one so when I saw this guy selling it for cheaper than other sellers, I thought it was a good deal," he said.

He contacted the seller last week and made an offer for the Western Digital cloud drive.

He agreed to the seller's asking price of $100 and told Stomp he did not negotiate for anything lower.

"I asked him if I could drop by his place to get the drive on Wednesday (Oct 24) and he agreed," the Stomper said.

"However, when I reached his apartment's lobby, I waited for five to ten minutes before he replied me.

"Eventually, he called me and told me that he didn't back up his files and that there was some problem with his drive.

"I was shocked that he agreed to meet but did not check his drive beforehand. 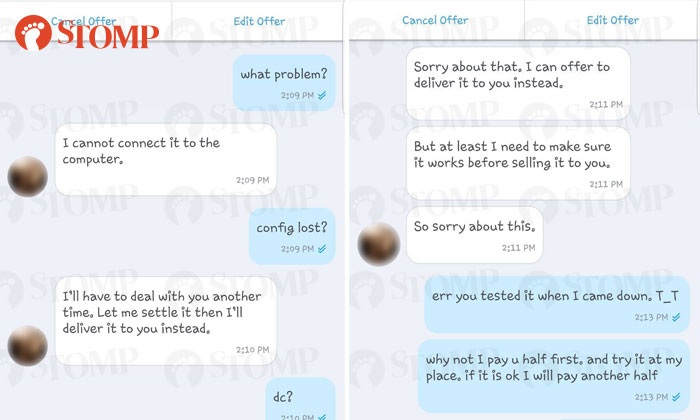 The Stomper said that he lives in Choa Chu Kang and that he wasted his time going down to the seller's home in Bedok Reservoir only to have him postpone the deal.

"I told him I would wait and see if he can solve the problem but he told me he was unable to deal that day.

"I then offered to pay him 50 per cent of the amount and take the drive.

"If there was a problem with it, I would return it to him and he could return me my deposit but he told me he didn't want to do that.

"He said that next time he would come to my location to close the deal."

The Stomper headed back after but did not hear any word from the seller for a few days after.

On Saturday (Oct 27), he decided to message the seller.

"I was a bit angry that he did not follow up and just tell me he did not want to sell it.

"I used harsh words but they were not too serious," the Stomper said.

He texted the seller: "You are the most irresponsible loser. Running away like a coward."

Riled up, the seller responded and called the Stomper a "loser" too.

The seller added other insults and said that he pitied the Stomper's family and called him cheap. 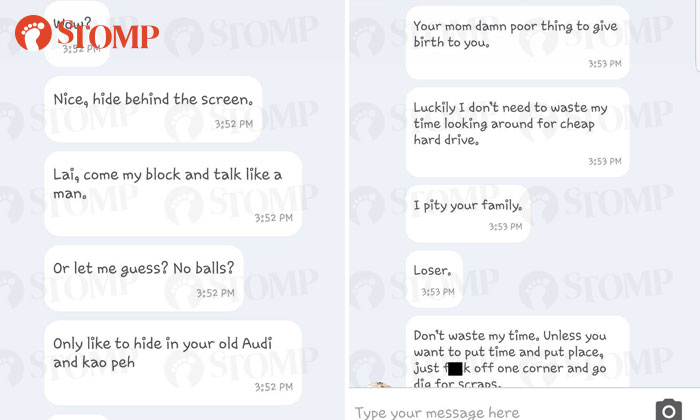 He wrote: "Don't waste my time. Unless you want to put time and put place, just f**k off one corner and go die for scraps."

The Stomper felt that the seller was too much and that he "should be banned".

"I hope he will learn from this and feel sorry about his behaviour."

Related Stories
Carousell user says dress has "no defect" -- but buyer gets it with stains, torn seams and odour
Carousell seller gets $45 deposit for USS tickets -- then tells Stomper 'no stock' and goes MIA
Carousell user makes offer for $0.50 toilet roll -- then asks for free delivery
More About:
Carousell
rude
vulgar