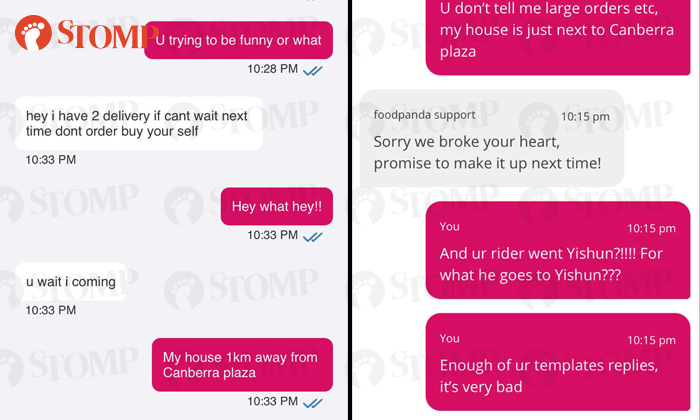 A Foodpanda customer was frustrated after what he felt should have been a quick 1km food delivery ended up being 45 minutes late.

Stomper Andy, a resident at Block 129B Canberra Street, said he ordered A&W from its Canberra Plaza outlet via Foodpanda on Wednesday night (April 7).

According to Google Maps, the two destinations are 1km apart and would take four minutes by bike.

Andy said: "The order was picked up at 10pm. By right, it's less than five minutes of riding from the restaurant to my house. But the rider went to Yishun, I don't know for what."

According to screenshots that Andy shared, the rider said she was unable to find Andy's address and needed 10 more minutes as she had multiple orders.

Andy also realised that the rider had headed to Yishun, which he found illogical.

The Stomper said: "Even got multiple orders also won’t be so far away right?

"The estimated delivery time by Foodpanda kept jumping from 10.05pm to 10.40pm."

Andy contacted Foodpanda about the matter, but got even more frustrated at what he deemed to be "template replies".

He added: "I kept asking them to cancel my order but they didn't want to do it."

At 10.39pm, Andy still had yet to receive his order and contacted Stomp.

He said: "My house is just 1km away from Canberra Plaza, but this rider is taking 40 minutes and counting, and I still haven't received my order. Omg...

"By the time my order reaches, it would be cold already.

"The issue here is how the rider was doing a few deliveries and mine was just a few blocks away but she went to Yishun which is like 2km to 3km away. It's ridiculous."

He told Stomp: "I was given a refund in the form of Foodpanda credits, omg. I was so angry with them that I used the credit to buy canned drinks and tidbits from Pandamart."