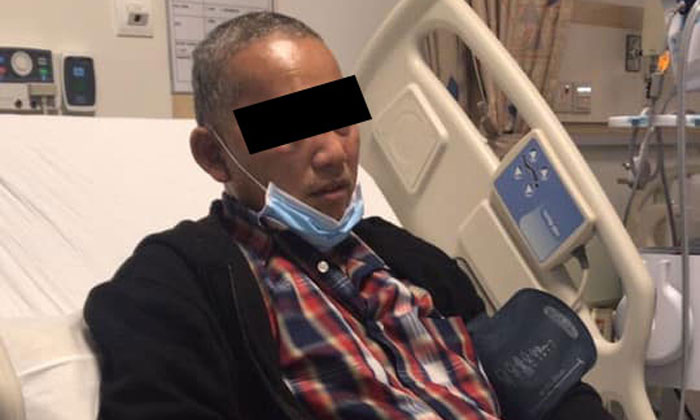 A 54-year-old taxi driver was taken to hospital after he was attacked in an attempted robbery at Hougang Avenue 6 in the early hours of Thursday morning (Feb 20).

Stomper Sarah alerted Stomp to a Facebook post regarding the incident that was posted by the cabby's son.

Facebook user Muhd Taufiq wrote in his post that his dad had picked up the suspect at Hougang Central Bus Interchange. The man subsequently told him he wanted to go to the casino at Resorts World Sentosa.

However, he forgot to take some of his personal items from his home so Taufiq's dad asked for his address.

The man told the cabby that he would direct him to the location.

After moving off from the interchange, the man reportedly told the cabby to turn left three times, leading him to a bus stop along Hougang Avenue 6, where he abruptly instructed him to stop.

Taufiq wrote that after his dad stopped his taxi, the man strangled his dad from behind the driver's seat with "excessive force".

In the midst of being strangled, the cabby managed to bite the man's hand.

The passenger reportedly exited the vehicle and opened the driver's side door and proceeded to punch the cabby multiple times in the chest and face.

"My dad tried to open the seat belt but [was] unable to as he was a bit weak and shocked at the same time that this happened to him," wrote Taufiq.

His dad finally managed to sound his horn to seek help from passers-by but Taufiq said there was no one around at that time.

He said the passenger then pulled the keys out of the ignition and threw it onto the dashboard before fleeing the scene.

"My dad immediately call[ed] the police himself and within 10 minutes, they came to assist my poor dad," he said.

He added that his dad had suffered fractures to his nose and rib cage from the incident.

In response to a Stomp query, a police spokesman said they were alerted to a case of attempted robbery along Hougang Avenue 6 at about 4.58am.