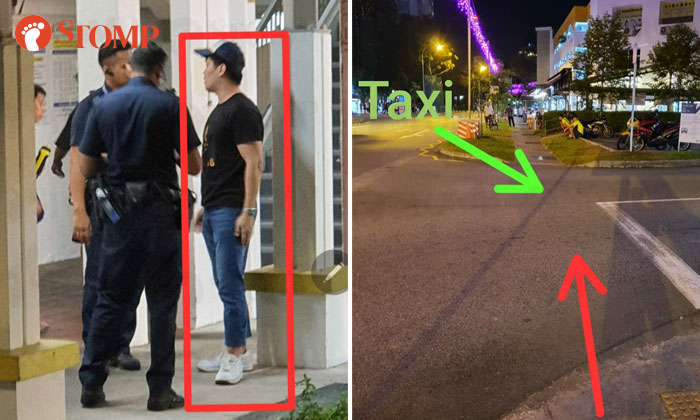 The police are looking into a dispute between a taxi driver and man that happened at a carpark at Block 684 Hougang Avenue 8 on Wednesday night (Jan 1).

Stomper Anonymous told Stomp that he and his wife were crossing a road to get to a coffee shop at Block 684 for dinner at about 8.55pm.

"While we were crossing the road, a taxi made a fast left turn into the carpark without indicating and almost hit us," the Stomper said.

"It frightened my wife who is pregnant.

"I then approached the cabby once he parked his taxi and politely asked him what would have happened if he had hit me or my wife.

"He said it didn't happen so there's no 'if' but I responded that if there's no 'what if', it would be too late.

"He subsequently scolded me 'k****a' and jio me to fight at a nearby lift lobby.

"I told him if he wanted to fight, we should do it at the carpark but he said he was scared there were cameras around."

Fearing for his and his wife's safety, the Stomper called the police.

He provided Stomp with the same details he gave to the police in his report.

Related Stories
First come first served? Not if you are snatching a parking lot
Man punches motorcyclist in middle of the road at Novena, falls over and nearly gets hit by car
Auntie 'tsks' at 14-year-old boy at Clementi Mall... and all hell breaks loose
More About:
dispute
cabby
argument