Man punches motorcyclist in middle of the road at Novena, falls over and nearly gets hit by car 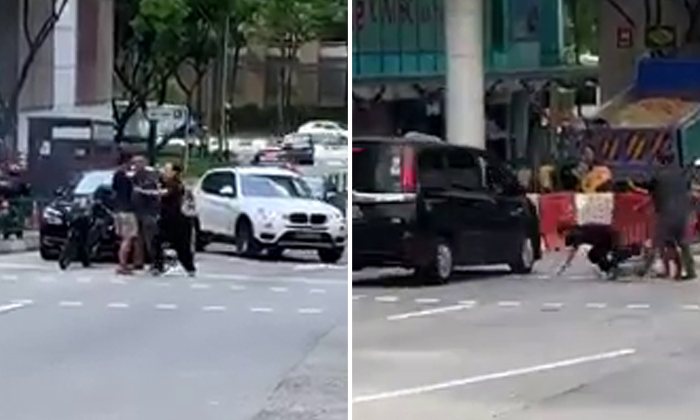 Police are investigating a fight that broke out between two men along Sinaran Drive in Novena, a spokesman told Stomp.

Several Stompers alerted Stomp to a video of the incident, which occurred outside Novena Medical Center on Dec 26.

In the video that has been circulating online, three men can be seen in altercation in the middle of the road and blocking traffic.

A man in a black shirt and black trousers can be seen throwing punches at another guy in Bermuda pants several times throughout the video.

Meanwhile, the third guy appears to be trying to break up the fight.

At one point, the man clad entirely in black is seen punching his opponent in the face, only to lose his balance and fall over onto the road. He narrowly avoids being hit by an oncoming black car.

The dispute appears to end with the guy in Bermuda pants getting on a motorcycle, which he had stopped in the middle of the road.

A large group of bystanders can be seen observing the scene from the pedestrian walkway opposite Novena Medical Center.

Related Stories
3 men arrested after pummelling one another during vulgar 'boxing match' at Teck Whye Lane
2 men arrested after messy fight breaks out at Jewel Changi Airport
Fight between 2 men at Canberra coffee shop ends in them removing shirts and getting arrested
More About:
fight
dispute