First come first served? Not if you are snatching a parking lot 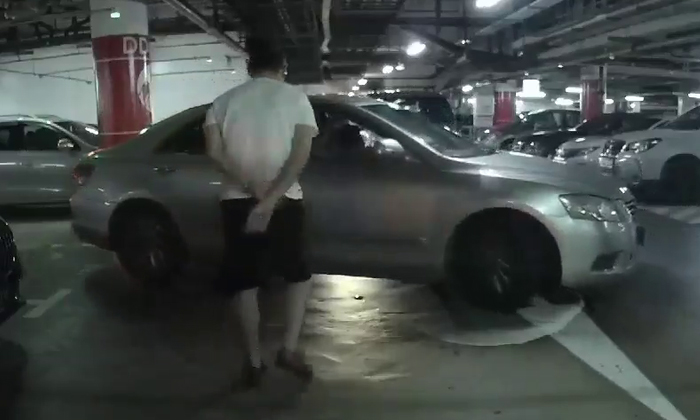 Well, not if you are competing over a parking lot, it seems, where it's all about survival of the fittest.

A video posted by Facebook page SG Road Vigilante shows how a motorist clearly had his sights set on a parking lot first, but unfortunately lost out to a Toyota driver.

It is unclear which multi-storey carpark the incident occurred at, though the video's time-stamp said it took place on Dec 28.

In the video, the motorist can be seen coming face-to-face with a Toyota, whose driver similarly wanted to park in a lot that had just been vacated by another car.

Both parties refuse to budge, but the Toyota driver eventually emerges 'victorious' due to his more advantageous position despite having arrived later.

A man in a white shirt, believed to be the car-cam driver, can then be seen approaching the Toyota driver and appears to express his displeasure.

The video then ends abruptly and it is unclear what happened afterwards.

In response to the video, many netizens said that the car-cam driver lost out to the Toyota driver due to his inexperience and felt that he should have just continued the face-off.

A few were more sympathetic and noted that the odds were against him, with one commenting: "Time and space all on the wrong side for cam car. Hope you have better luck next time."

However, several users also pointed out that there was a child in the car, based on a voice that can be heard calling "papa" in the video, and said that the car-cam driver was being a bad role model.

One netizen called him a "very childish father" while another wrote: "My goodness... If you have kids in the car just move on."

Related Stories
Guy stands in Pepys Road lot to 'chope' it for friend even though another driver is waiting
Woman chopes parking lot by standing in it, refuses to budge even when honked at
Auntie exits minibus to nag at car driver for stopping at drop-off point to let wife and sick baby alight
More About:
parking
parking fail
dispute