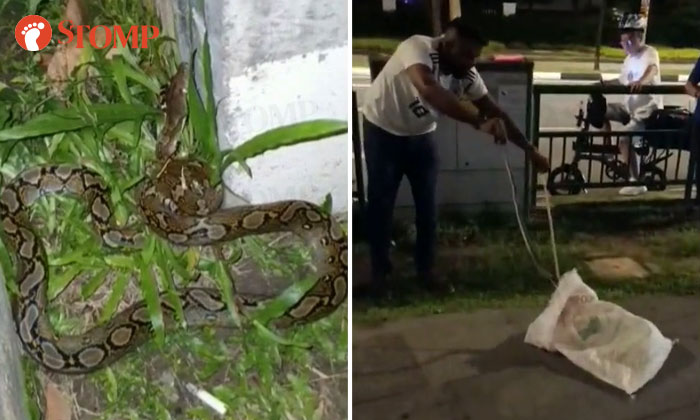 Stomper Harishan was at Clarke Quay on Thursday night (Mar 26) when he saw a man bravely catch a snake.

He shared with Stomp a video of the incident that happened at about 9.15pm.

"Clarke Quay was rather secluded as it was the last day of operation for bars and clubs," he said.

"This man, Vinod, spotted a python gliding across a grass patch near the taxi stand at the entrance of Clarke Quay while he was chatting with his colleagues.

"Upon seeing the python, he acted swiftly by alerting security and the relevant authorities."

In the video Harishan shared, Vinod is seen using a long stick to securely slip the snake into a sack.

"He began to tame the snake and thought of a way to keep it within his view so as not to cause alarm or danger to other patrons in the area," the Stomper said.

"He picked up a long stick and the snake started to coil around it.

"Security arrived with a sack just in time for Vinod to slip the coiled-up snake nicely into it.

"He taped and secured the sack and waited for the arrival of the relevant authorities to hand over the python.

"The patrons, staff and security personnel who were at the scene applauded his bravery and sense of initiative.