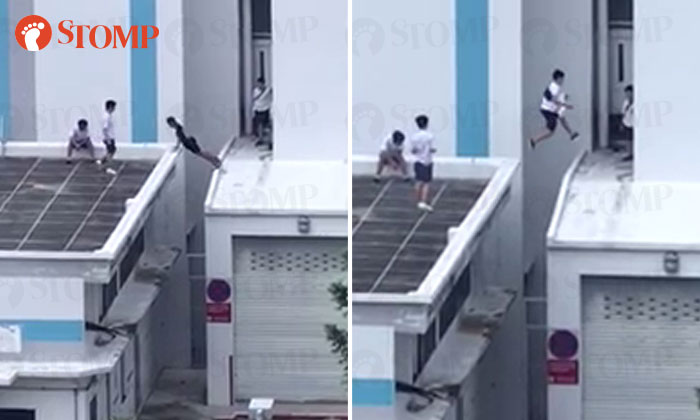 The police have alerted the school of a group of its students who were spotted leaping from a ledge at Block 157 Serangoon North Avenue 1 on Wednesday morning (Oct 2).

Stomper Tiramisu witnessed the boys' acts from her office opposite the block.

In a video she shared with Stomp, the boys can be seen leaping from a ledge on the second-storey of the HDB block to the roof of a small building next to it.

"It was so scary to see them playing parkour," she said.

"It may have only been on the second floor but if one of them fell, they could still get injured.

"Dangerous acts and any misstep will lead to serious consequences."

The Stomper told Stomp that she alerted the police shortly after seeing the boys repeatedly jump over the gap on the second floor of the block.

In response to a Stomp query, the police said they received a call for assistance at about 10.35am.

"The students involved were advised by officers accordingly," a police spokesman said.

The police have also alerted the students' school to the incident.

Related Stories
Toa Payoh resident 'almost has heart attack' after seeing kid climb over parapet
Trio won't think it's cool riding 1 PMD together on the road when an accident happens
2 kids dash out in front of car while riding PMD -- with father following behind
More About:
dangerous
Youths behaving badly
parkour