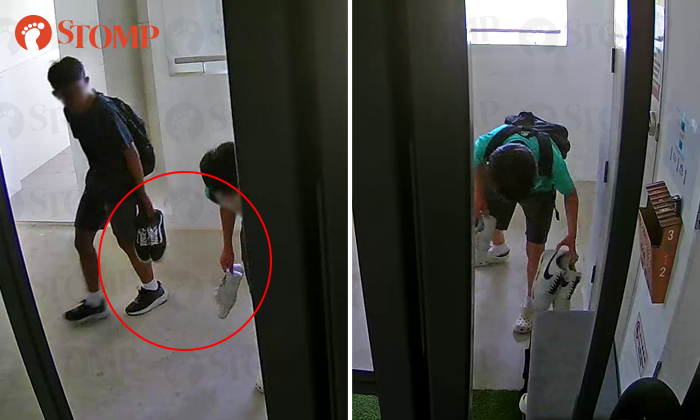 Shoe-shopping, but at a Housing Board (HDB) block instead of the mall.

Stomper Jessie caught on camera two youths stealing her son's Nike shoes from outside her doorstep at Block 662A Edgedale Plains on Tuesday (Jan 17), at around 8.54am.

She said: "I am disappointed with those two young boys who stole my son's Nike shoes,which cost over $200.

"They can be seen with three pairs of shoes in total. They ought to have some discipline."

Jessie said that her son, an 18-year-old full-time National Servicemen (NSF), had worked hard to afford the shoes by doing Grab deliveries.

She added: "My husband has already made a police report and was told that they would investigate.

"My son also managed to get some help from his friend and was able to identity which secondary school the culprits are from. He has already dropped the school a message.

"I hope the two boys will return the Nike shoes to the rightful owner."

In CCTV footage that Jessie shared with Stomp, a boy in a green shirt and a boy in a black shirt can be seen walking past her unit and looking at her shoe rack.

Both are holding a pair of shoes each in their hands.

Green Shirt then bends down and takes a pair of Nikes from the shoe rack, while Black Shirt watches and grins.

Both run away with three pairs of shoes in total.

Stomp will not be uploading the video as the boys appear to be minors. The secondary school that they are believed to be from is located in the neighbourhood.

View more screenshots in the gallery.

Related Stories
Man grabs most unlikely item ever from laundry rack at Tampines corridor and runs away
Man puts on an act to steal 2 pairs of Adidas slippers in Hougang, deserves a Razzie
Man who stole $159 shoes from Eunos corridor, you have 24 hours to return them
More About:
theft
stealing
Youths behaving badly
student
students