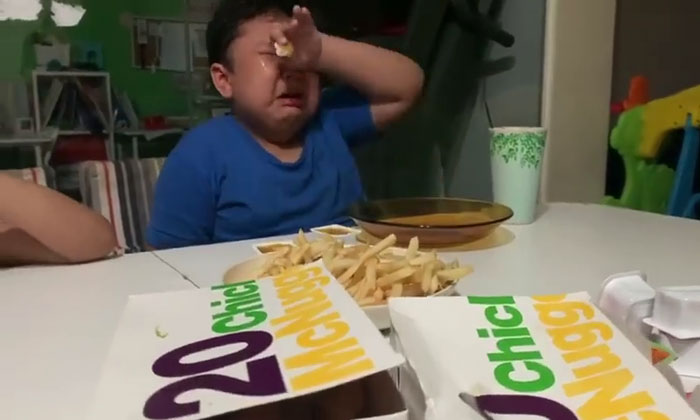 Singaporeans across the island rejoiced when McDonald's re-opened on May 10 after three weeks of closure.

However, the award for best reaction goes to nine-year-old Adam Bin Mohammad Irwan who was surprised with his favourite meal.

In the video, the mother-of-four had bought McDonald's meals for her children from Pioneer Mall as a special treat to break their fast on Monday (May 18).

She is seen hiding the food in a red plastic bag so that they do not suspect anything.

When Adam exits his room and notices the McDonald's food on the family's table, he bursts into tears.

While eating his chicken nuggets, he bursts into tears again and repeatedly says "thank you".

He even holds a nugget tenderly to his cheek.

Madam Wati told Stomp the reason for Adam's "overreaction" was because he has mild autism and sensory issues.

She added that the Pathlight School student's all-time favourite meal is McNuggets with fries and iced Milo.

The meal was a treat to Adam who was disappointed when McDonald's announced it would be closed from Apr 19 during the circuit breaker period.

Madam Wati joked that if McDonald's saw the video they would make Adam their new mascot.

The video has touched the hearts of many netizens including Fyza who said: "This boy's genuine reaction is enough to move people's hearts."