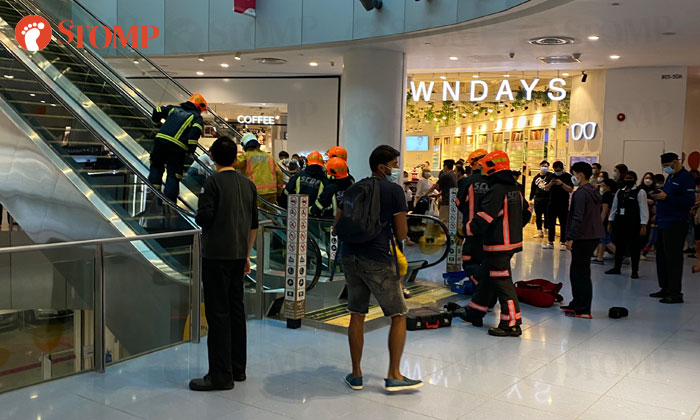 A boy was taken to hospital after getting his foot stuck in an escalator at VivoCity on Sunday afternoon (Sep 13).

The Singapore Civil Defence Force (SCDF) said it responded to a call for assistance at 1 Harbourfront Walk at 2.20pm.

Stomper Dee alerted Stomp to the incident and shared a photo of SCDF officers at an escalator between the second and first floor of the mall, near Owndays.

"Apart from SCDF officers, mall staff and safe distancing ambassadors were at the scene as many people had gathered around to see what had happened.

"I was scared to get too near."

She added that a dog was left bleeding after getting its paw stuck in another escalator at VivoCity last month.

A video of the incident was also posted on TikTok by user @wonraekang0523.

In response to a Stomp query, an SCDF spokesman said: "Upon SCDF's arrival, a boy was found with his foot lodged in an escalator.