Escalator steps dislodge at Waterway Point due to 'foreign object' 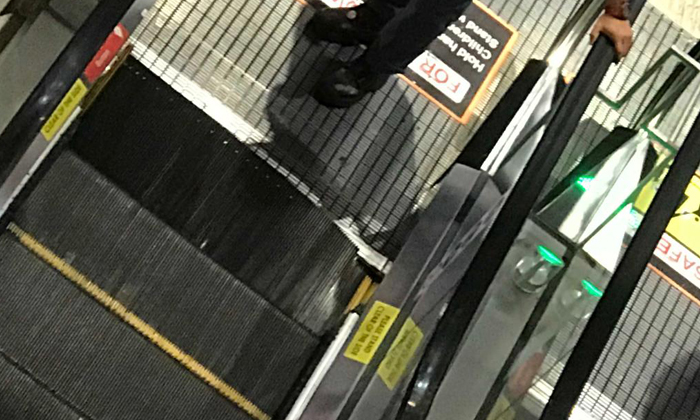 Steps of an escalator at Waterway Point in Punggol were dislodged on Friday afternoon (Nov 29), less than three months after a similar incident occurred at the shopping mall.

Stomper Tony shared a picture of the incident that was posted by All Singapore Stuff on Facebook and captioned: "Waterway point escalator step dislodged again. Wa dangerous siol."

The photo originated from a blog, whose author had witnessed the incident.

Pris of Punggol Babies wrote in her blog post: "With an infant in my carrier, we heard loud clanking sounds before the steps popped up right before my eyes.

"I was just a step away from that dislodged step.

"I hugged my baby with my shivering arms and turned around asking the crowd to go back up."

According to a Waterway Point spokesman, the escalator on Basement 1 had suffered a malfunction after a foreign object causes some steps to be dislodged.

"The affected area was cordoned off, and security personnel were on site to re-direct customers," added the spokesman.

There were no injuries reported and the escalator will be restored to service once it is verified to be safe for operational use.

The spokesman also said: "Shoppers are reminded to take care while using escalators, especially if they are handling trolleys, prams, or carrying heavy items. We advise that these shoppers consider using the elevators instead.

"We regret any inconvenience caused."

This comes after a similar incident on Sep 28, when an escalator on the first floor of the mall had its steps dislodged.

While no injuries were reported in that incident, a witness had said that "people were on the escalator were sent tumbling".