Elderly shoppers injured after falling from escalator at Northpoint City 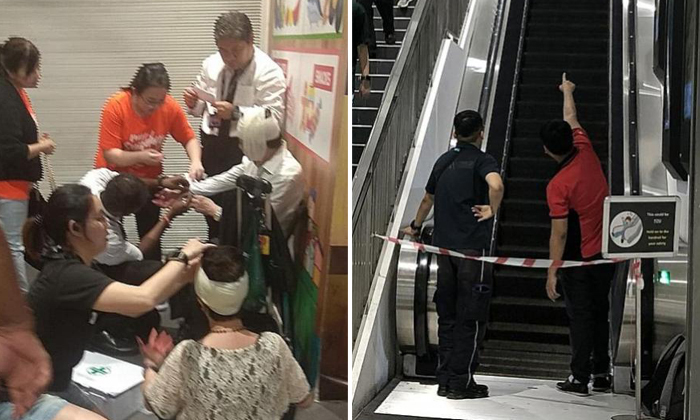 Three elderly shoppers fell while they were on an escalator in Northpoint City mall on Sunday.

The incident prompted members of the public to manually switch off the escalator, a mall spokesman told The New Paper yesterday.

The Singapore Civil Defence Force said that four people were taken to Khoo Teck Puat Hospital, two of whom had head injuries.

TNP understands that the injuries were minor.

The mall spokesman said that the incident happened at around 5.30pm when three shoppers in their 60s and 70s fell and sustained injuries on an upwards-moving escalator at Northpoint City's South Wing.

Members of the public who saw the incident then brought the escalator to an emergency stop.

The mall spokesman added: "Security personnel and service staff on-site attended to the shoppers and administered first-aid treatment to their injuries.

"Arrangements were made by the staff for the group of shoppers to receive further medical assistance, and they were taken to a nearby hospital shortly after."

As a precaution, the escalator was cordoned off until further checks were made by the relevant authorities. The mall said no malfunction was detected, and the escalator resumed operation at 9.15pm the same day after receiving clearance from the authorities.

Chinese evening newspaper Shin Min Daily News reported yesterday that the escalator had broken down, causing the shoppers to lose their balance.

A witness who wanted to be known only as Mr Zhuang told Shin Min that a bystander went to retrieve the mall's first-aid kit, and several others helped to comfort and bandage the two people who had sustained head injuries before the paramedics arrived.

Two men, who appear to be security personnel from the mall, were helping the victims.

According to the Building and Construction Authority (BCA) online guide to escalator safety, there are about 6,000 escalators in Singapore.

The BCA said on its website that safe riding on escalators is a shared responsibility.

It said: "Escalator safety is a shared responsibility. Escalator owners and escalator contractors play an important role in ensuring that their escalators are being maintained according to the prevailing standards.

"Escalator users also play a part in proper and safe use of escalators."