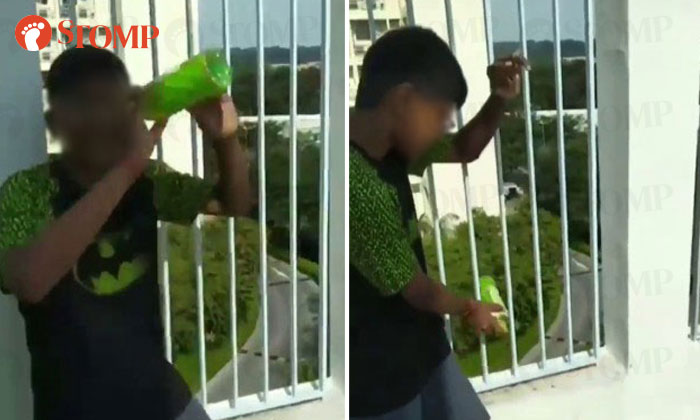 A boy was caught on video throwing a plastic water bottle off a building in a video that was posted on Instagram Stories.

Stomper Jason alerted Stomp to the video and said that it was posted at about 4.30pm on Thursday (Sep 6).

However, when Stomp searched for the Instagram user who posted the video, the account did not show up.

"I'm not sure where it happened as the location was not revealed in the story," said Jason.

In the video, the boy puts up a show with the water bottle as his friend films him and pretends to take a swig from the empty bottle.

His friend is heard saying, "What the f***k are you going to do?" before he swings the bottle towards the edge of the building a couple of times before dropping it off the side.

"Personally, as someone who has encountered acts of high-rise littering in my neighbourhood, I feel that this is unacceptable behaviour that should be dealt with and corrected at a young age.

"I understand that children may commit inconsiderate acts in the heat of the moment, but by gaining enjoyment from such potentially dangerous offences, and bragging about their "brave" act online, they have gone too far and should be reprimanded appropriately.

"This should also serve as a warning to parents on how they should educate their children on being considerate and mindful of what consequences their actions will bring."

This is not the first time youths have been caught behaving badly on video. Last month, there were several incidents involving youths posting videos of their bad behaviour on social media.

In one incident, a trio filmed themselves smoking an e-cigarette and cigarettes on a public bus.

Before that, a group of youths took a joyride in a car driven by one of them and another boy was seen performing push-ups on a parapet while dangling several storeys above ground.

In two other cases, a youth was seen speeding down a road while pushing his friend in a trolley while another guy was seen dashing out into the middle of a road to do push-ups.

Related Stories
Guys smoke e-cigarette and cigarettes on bus -- then film themselves and post video on social media
Youth takes father's car for joyride while friends film him: "This guy is a professional man"
Youth climbs over parapet and performs push-ups while dangling several storeys above ground
More About:
Youths behaving badly
killer litter
litter
litterbug