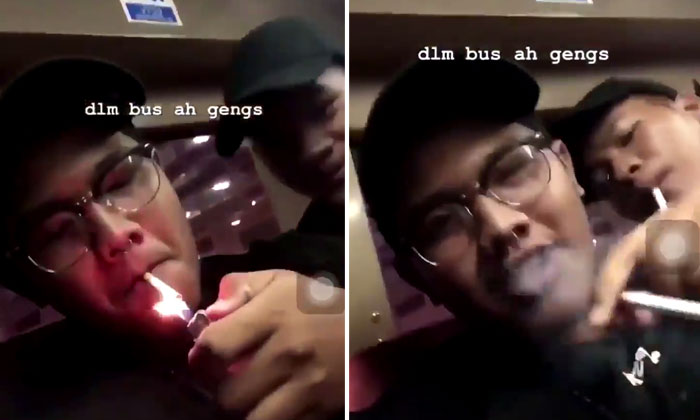 Three guys were caught on video smoking an electronic cigarette (e-cigarette) and cigarettes on a public bus.

The video was posted on Instagram Stories and has since started circulating online. It was also posted on Singapore Uncensored's Facebook page and has since garnered over 24,000 views.

In the video, the trio look directly at the camera and grin as they light up and puff on their cigarettes.

The words, "dlm bus ah gengs" which translates to "in the bus, friends", are captioned over the video.

Netizens have slammed the young men's actions as "stupid" for recording themselves doing something that is clearly prohibited.

One netizen pointed out that the guy smoking the e-cigarette could potentially face harsher penalties. 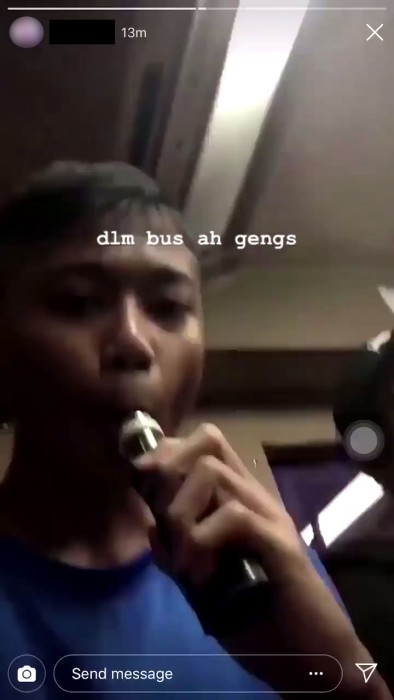 According to the Tobacco (Control of Advertisements and Sale) Act, first-time offenders caught importing, selling, buying or using and possessing tobacco products like e-cigarettes may face up to six months' jail and/or a fine of up to $10,000.

This month, there have been several incidents involving youths posting videos of their bad behaviour on social media.

Over the weekend, Stomp reported on a group of youths taking a joyride in a car driven by one of them.

Last week, a boy was seen performing push-ups on a parapet while dangling several storeys above ground.

In two other cases, a youth was seen speeding down a road while pushing his friend in a trolley while another guy was seen dashing out into the middle of a road to do push-ups.

Related Stories
Youth takes father's car for joyride while friends film him: "This guy is a professional man"
Youth climbs over parapet and performs push-ups while dangling several storeys above ground
Youth speeds down road while pushing friend in supermarket trolley against traffic
"Beyond savage" youth rushes out to road in Bukit Batok, does 5 push-ups and runs back again
More About:
Youths behaving badly
smoking
e-cigarette