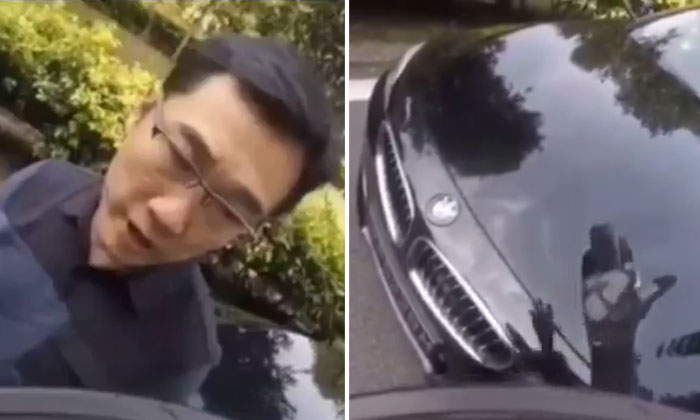 A BMW driver came into contact with a motorcycle twice while travelling behind the rider.

Stomper Allen alerted Stomp to the video that was posted in SG Road Vigilante's Facebook group page. It is unclear when or where the incident happened.

In the footage, that was recorded by the motorcyclist, the BMW comes into contact with the motorcycle just as the rider is about to move off.

biker stop and confronted the driver. ...

The rider taps on the bonnet of the BMW and gestures at him about coming into contact with his bike.

He then gets off his motorcycle to talk to the driver and his passenger.

The video has no sound so it is unclear what was said but according to the captions on the video, the driver's female passenger allegedly said, "Because all cars were moving".

The rider was "lazy to argue" so he got onto his bike to ride off but the BMW inched forward and made contact with his bike yet again.

This time, the rider was frustrated and hit the bonnet of the car with the palm of his hand twice before gesturing at the driver.

The driver exited his BMW and spoke to the driver, pointing at the bike before the video ends.

Related Stories
Passenger accuses Gojek driver of kidnapping her after she refuses to pay for ERP
Woman blocks bus from moving off and demands driver make U-turn after missing her stop
Cyclist confronts pedestrian who caused woman to fall off her bike and walked away without helping
More About:
motorcyclist
BMW
dispute
argument