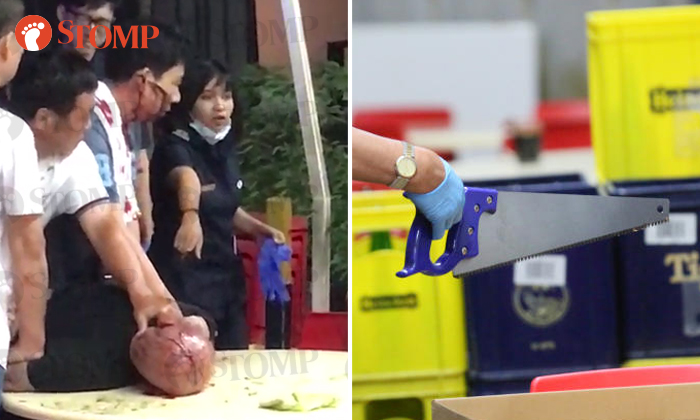 A fight that broke out at a coffee shop along Lorong 25A Geylang on Wednesday night (April 3) allegedly started due to secondhand cigarette smoke.

A video of the incident was first published by Stomp and shows two men, aged 51 and 53, in a bloodied state at the scene.

The younger man, who is bald, can also be seen being restrained against the table by several others. He was subsequently arrested for voluntarily causing hurt by a dangerous weapon.

A friend of the bald man told Shin Min Daily News that they had been sitting in the smoking zone at the coffee shop with a female acquaintance, next to the 53-year-old man and his companions.

According to Mr Chen, the bald man heard the other party saying something offensive from their table. Although the bald man was unhappy, he did not do anything.

"The space in the smoking zone was narrow to begin with and the people from the next table kept shifting their chairs over, making the space even narrower," said Mr Chen.

"Their cigarette smoke blew towards our table and into our faces. We tried speaking to them but they simply continued to smoke."

Mr Chen said the bald man then spoke up again, only for the 53-year-old man to stand up and reply loudly: "This is the smoking area, why can't I smoke here?"

Angered, the bald man left the scene for 10 minutes -- and returned with a 30cm saw.

Mr Chan added: "He kept telling me to leave. I had only taken a few steps when he suddenly pulled out the saw and attacked the other guy with it."

According to CCTV footage seen by Shin Min, the 53-year-old man retaliated by hitting the bald man on the head with a beer mug.

The bald man was eventually pinned down against the table.