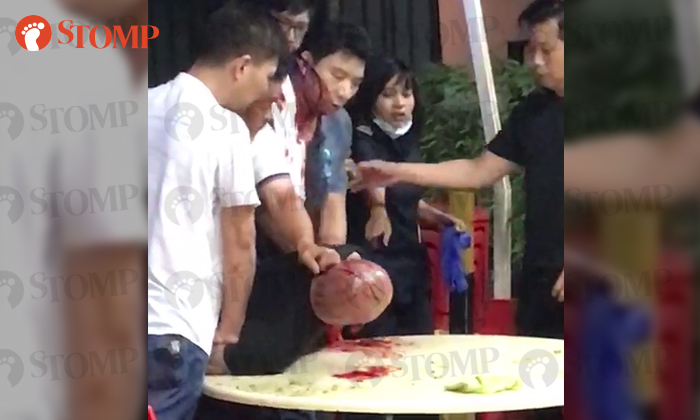 The fight allegedly started due to secondhand cigarette smoke.

Two men were seen in a bloodied state after a fight at a coffee shop in Geylang on Wednesday night (April 3), with one of them being apprehended by the police.

The police told Stomp in response to queries that they were alerted to the fight along Lorong 25A Geylang at 8.50pm.

The Singapore Civil Defence Force also confirmed that it received a call for medical assistance.

Two men, aged 51 and 53, were conscious when taken to Tan Tock Seng Hospital.

Stomp understands that one of them suffered facial injuries.

The younger man was subsequently arrested for voluntarily causing hurt by a dangerous weapon.

A Stomper alerted Stomp to a circulated video of the incident, showing a man being held down against a table by several others.

Blood can be seen on the man's head and on the table.

One of the guys holding the man down appeared to have a gash on his cheek and had a bloodied towel slung over his shoulder. Paramedics can later be seen attending to him.

Towards the end of the video, someone is also heard saying: "The police are here."