Biker has severed hand, spinal injuries in accident with taxi at Republic Boulevard 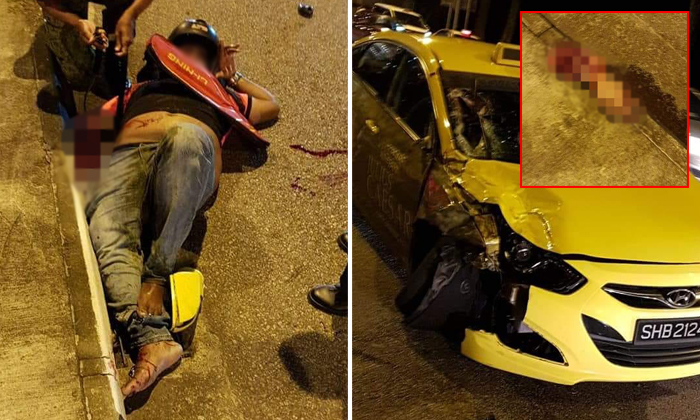 A netizen, who shared a photo of the motorcyclist in hospital, said doctors were able to re-attach the victim's severed hand.

Read the full update here: Motorcyclist who had hand severed in accident with taxi gets limb re-attached

Three men were hurt in an accident involving a motorcycle and a CityCab taxi along Republic Boulevard on Saturday evening (June 30), including a motorcyclist who sustained spinal injuries and had his hand severed.

Stomp understands that the taxi had a punctured front tyre, which caused the cabby to lose control of his vehicle and mount the central road divider.

The taxi then collided into the motorcyclist and his pillion rider, who were travelling in the other direction.

In response to a Stomp query, the police said that they were alerted to the accident at 7.39pm.

The 59-year-old taxi driver, the 41-year-old motorcyclist, and the 31-year-old pillion rider were conscious when conveyed to Singapore General Hospital.

According to the Singapore Civil Defence Force, two of them were serious cases and the hospital was alerted to be on standby to receive them.

Stomp understands that the motorcyclist's hand was severed and he is also believed to have suffered spinal injuries.

The pillion rider sustained major traumatic injuries to his neck, while the cabby had abrasions. A passenger on the taxi was unhurt.

Several Stompers alerted Stomp to gruesome photos of the accident that have been circulating on social media.

In one image, the motorcyclist can be seen lying by the roadside with a pool of blood around his right arm, while a man tended to him.

The photos also show a CityCab with a dented front bumper and a broken windscreen, as well as a Malaysia-registered motorcycle lying on the road.

Responding to a query by Stomp, Ms Tammy Tan, Group Corporate Communications Officer for ComfortDelGro Corporation Limited, said: "We are sorry that this has happened.

"Our priority is the well-being of the motorcyclist and his pillion rider and we will assist them the best we can.

"Our loss adjustors and customer service team are already in touch with the motorcyclist's employer and will visit the motorcyclist and the pillion rider in the hospital to render assistance.

"Our cabby has been given outpatient treatment, while a passenger who was onboard the taxi at the time was uninjured.

"We are also assisting the Police in their investigations."