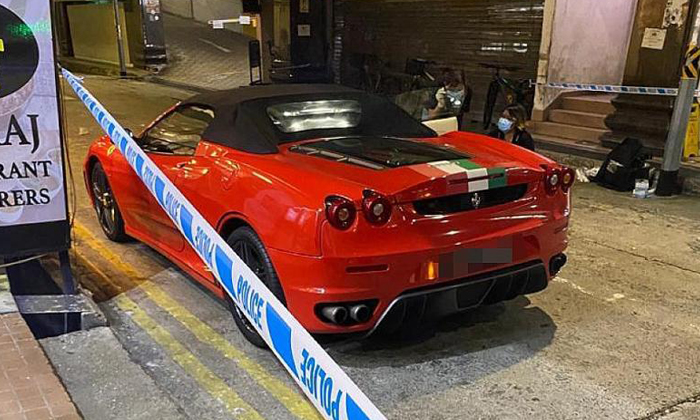 It was over in a matter of seconds. But what transpired in those brief moments in Little India on Sunday night left witnesses stunned and bewildered.

After the driver of a red Ferrari parked his supercar in a service road off Verdun Road around 9pm, a white Audi pulled up in front of it.

Four men leapt out to confront the Ferrari driver and forced him to kneel before bundling him into their car and speeding away, leaving the Ferrari behind, Chinese evening daily Lianhe Wanbao reported yesterday, quoting witnesses.

While most were shocked and baffled by what looked like an abduction, a few were alert enough to call the police.

The witnesses told Wanbao that the Ferrari driver was made to kneel before he was forced to get into the Audi.

There was no shouting and the incident was over in seconds, they said.

The police were quick to arrive and cordoned off the alleys near where the Ferrari was parked, the witnesses added.

A female security guard who was on duty at the time told Wanbao that she was shocked by the incident.

"I didn't expect those people to be so brazen and take the man away in full view of the public," added the guard, who declined to be identified.

Another unnamed witness told Wanbao that the Ferrari was towed away at about 4am the next day.

The police said yesterday that they had arrested four men, aged between 31 and 33, for their suspected involvement in a case of wrongful confinement in relation to the Little India incident.

They said in a press release that officers from the Central Police Division and Criminal Investigation Department had established the identities of the suspects through ground inquiries and follow-up investigations before arresting them on Monday.

Shedding some light on the abduction, they said that preliminary investigations had revealed that the four men are believed to have wrongfully confined the victim to demand the return of a sum of money he had purportedly stolen from one of them in an e-commerce scam.

Investigations against the four men are ongoing.

It is not known how the Ferrari driver was released from his alleged wrongful confinement.

But checks showed that he was charged on Tuesday with one count of cheating.

The charge sheet names him as Andrew Lim Zi Kai, 29. He was alleged to have cheated a woman of $350 on Carousell after promising a hotel booking package at Marina Bay Sands that was never delivered.

He has been remanded after he was not offered bail.

Court records also indicate that investigations against him are ongoing, and he could face nine more similar charges.

Lim is expected to be back in court on Sept 15 for a further mention of his case.

If convicted, he can be jailed for up to 10 years and fined.

Those convicted of wrongful confinement can be jailed for up to three years and/or fined.