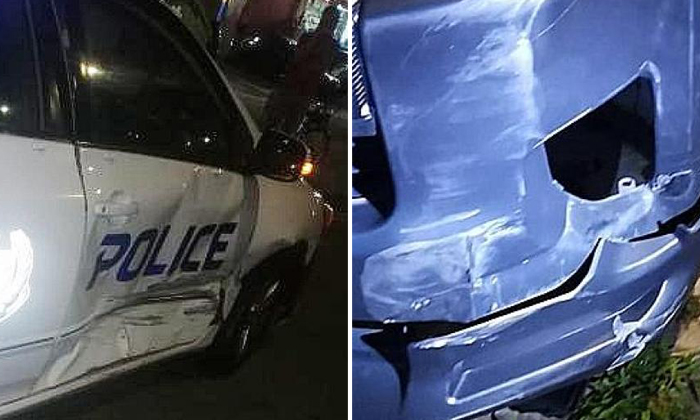 When two police officers tried to question a man in a Volkswagen at a carpark, he suddenly sped forward and rammed his car several times against a police car blocking his exit.

His actions caused the police car to shift, creating enough space for the man to squeeze his car past and speed away, leaving behind an injured officer, said eyewitnesses.

The drama unfolded at Bukit Merah Lane 3, a hub of automotive workshops, on Wednesday evening.

The police that said they arrested a 37-year-old man yesterday in connection with the incident.

The man was detained for his suspected involvement in a case of rash act causing hurt and a drug-related offence, the police said in a statement yesterday evening.

It did not mention where the man was arrested.

The police confirmed the incident happened on Wednesday while they were conducting a check on the man during an operation in Bukit Merah Lane 3.

During the check, the man was uncooperative.

The Singapore Civil Defence Force said it received a call for assistance at about 8.20pm at 1001 Bukit Merah Lane 3.

A person was taken to Tan Tock Seng Hospital.

Eyewitnesses said the incident itself was over very quickly but the commotion lasted about an hour.

The manager of a nearby motor workshop, who wanted to be known only as Mr Wong, said he was heading back to the workshop after buying dinner when he saw two policemen approaching a Volkswagen in a parking space.

He told The New Paper in Mandarin yesterday: "(The policemen) kept knocking on his window and told him to step out of the vehicle, but he refused to do so."

Mr Wong said the driver suddenly accelerated his Volkswagen and rammed into the police car blocking his car several times.

He said: "The impact caused the police car to shift, and the driver squeezed through the space he created and sped off. It happened very quickly."

Mr Wong said in the process of escaping, the driver also scraped the left side of a Toyota Hiace van, which was parked next to it and belonged to his customer.

He said the policeman who was hit by the Volkswagen was clutching one side of his lower body but did not look too badly hurt.

The officers then made a few calls and more police cars arrived soon after, said Mr Wong.

The boss of another motor workshop, who declined to be named, said the suspect had sent in his Volkswagen sometime last week to fix a damaged front bumper.

After the repair, the car was left in a carpark space near his workshop to await collection by the driver.

He told TNP in Mandarin: "I did not notice anything suspicious about the man, and he behaved like any customer."

He said he noticed something amiss only when he saw the police car in the area.

His employee told him he had noticed the police car cruising around the area before the incident.

From a distance, he said he could see the police officers approaching the car, followed by a loud noise and the Volkswagen speeding away.

He said: "Instinctively, we went over to check what had happened and to see if anyone was injured."

He said the injured policeman looked like he was in pain and was limping, although the injury did not look too serious.

The extent of the policeman's injury is not known, but TNP understands that he is in stable condition.

The suspect will be charged in court today with committing a rash act causing hurt.

The police said: "The police have zero tolerance towards such brazen acts which threaten the safety of our officers and will not hesitate to take action against those who blatantly disregard the law."