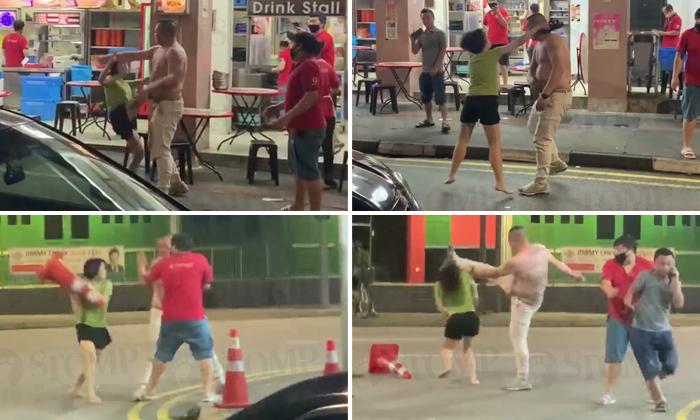 Two people were arrested after a fight broke out in Geylang during the wee hours of Tuesday (Aug 18).

In response to Stomp queries, the police said they were alerted to a case of affray at 6 Lorong 9 Geylang at 2.25am.

Several Stompers alerted Stomp to videos of the incident that have been circulating on social media, showing a man and a woman involved in the fight outside a coffee shop.

The barefooted woman can be seen swaying about on her feet and trying to rush towards the man, only to be pulled back by an onlooker.

Meanwhile, the man removes his shirt, drapes it on another onlooker and approaches the woman despite attempts to stop him.

The woman tries to deliver a flying kick at the man, but is beaten down to the ground by him.

She then picks up her shoes, which she uses to repeatedly whack the man.

The altercation continues on the road, during which the woman keeps trying to kick the man.

She then picks up a traffic cone but is pushed to the ground before she can hit the man.

The man is seen forcefully shoving an onlooker before kicking the woman in the face and causing her to fall to the ground again.

A police spokesman told Stomp: "A 37-year-old man and a 39-year-old woman were arrested in relation to the case.

The man was subsequently taken to Singapore General Hospital in a conscious state.

Related Stories
Chairs, glass and punches thrown during fight at Hougang coffee shop: 5 arrested
3 men fined over 'meaningless' fight outside MBS casino: Dispute was over taxi, not woman
Man allegedly threw plate of rice at cleaner and pushed her after she cleared his coffee away
More About:
fight
dispute
arrest