BF of uni girl who complained about him pursuing 'low-class' SCDF job speaks up, ends relationship 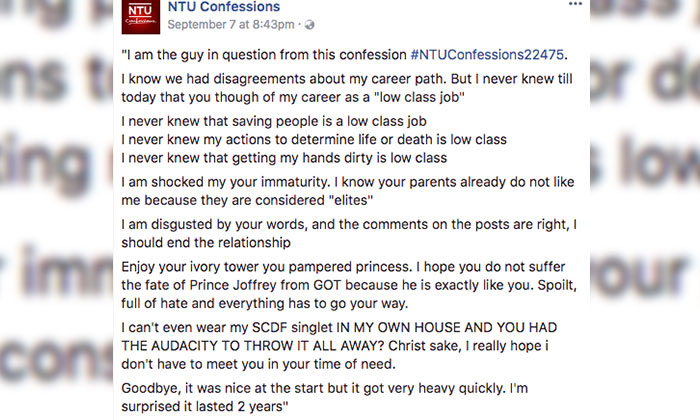 The alleged boyfriend of a female university student who posted on Facebook about her boyfriend’s decision to pursue a ‘low-class job’ as an SCDF (Singapore Civil Defence Force) regular, has spoken up.

In an update on the NTU (Nanyang Technological University) Confessions' Facebook page, the boyfriend of two years snapped at his girlfriend’s immaturity and said he was ‘disgusted’ by her words.

He also said that he should follow the advice some netizens posted and end the relationship.

“I am the guy in question from this confession #NTUConfessions22475.

“I know we had disagreements about my career path. But I never knew till today that you thought of my career as a "low-class job"

“I never knew that saving people is a low-class job

“I never knew that getting my hands dirty is low class

“I am shocked by your immaturity. I know your parents already do not like me because they are considered "elites"

“I am disgusted by your words, and the comments on the posts are right, I should end the relationship

“I hope you do not suffer the fate of Prince Joffrey from GOT because he is exactly like you.

“Spoilt, full of hate and everything has to go your way.

“I can't even wear my SCDF singlet in my own house and you had the audacity to throw it all away?

“Christ sake, I really hope I don't have to meet you in your time of need.

“Goodbye, it was nice at the start but it got very heavy quickly.

In light of this outburst, some netizens thought that the man should forgive his girlfriend if he really loved her.

Others supported his decision to part with his girlfriend.

However, some labelled the entire fiasco as ‘trolling’ and questioned the authenticity of both posts.

Whatever your take on this, you'll have to agree, this is nothing if not dramatic.

This story is based on the postings on NTU Confessions's Facebook page.

We cannot verify the veracity of this posting, as well as the previous one, and whether if they involve real individuals.