Not enough data on your phone same as starvation and suffering from poverty? Controversial ad divides netizens 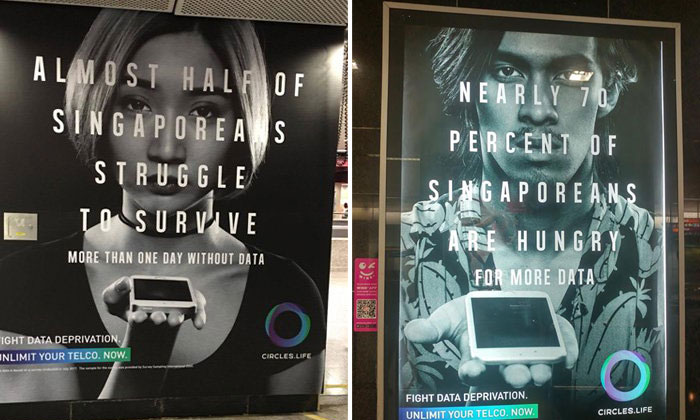 Are we a nation of insensitive and socially tone-deaf individuals, or do we just need to lighten up and not be so easily triggered?

That seems to be the rift when it comes to reactions to mobile operator Circles.Life's controversial advertisments.

The ad campaign emulates the heart-tugging, tear-jerking UNICEF-type visuals which highlight the plight of the poverty-stricken.

But do Singaporeans think data-deprivation equates to starvation? It appears not. The provocative posters were judged to be 'horrible' and in poor taste, at least by Facebook user Hazirah Mohamad.

Hazirah posted a lengthy rant on Facebook about the ads last Sunday (Aug 13), after her feedback to the company was met with a generic customer service reply. However, others saw the lighter side of the campaign and its creative stance, with many expressing the view that the issue has been blown out of proportion.

As the debate got heated, the argument degenerated into a tirade of insults, but some managed to keep their cool.

And then there was this person who saw an opportunity and took it.

In the midst of the controversy, Circles.Life has since responded - albeit rather blandly, to the backlash.

According to a Marketing Interactive article published on Wednesday (Aug 16), the telco thanked netizens for bringing its ad to attention, and said it would take note of its feedback, and "include it to the next round of process updates".

The spokesperson declined to comment further on the controversy, adding that the campaign was also to highlight how data-deprived Singaporeans are.

"Our data deprivation movement aims to bring awareness to the fact that Singapore has been deprived in mobile data offerings. Our users consume on average 8GB of data each month, twice the claimed national average," said the spokesperson.

Marketing Interactive added that this is not the first time the company has engaged in bold marketing campaigns.

"In March this year, the online telco pulled a marketing stunt which saw the vandalising of "competitor" out of home assets. The "competitor" in question was SGMobile, a fake company it created claiming to be Singapore's 'fourth telco'", said Marketing Interactive.

Even among professionals in the creative industry, opinions were divided.

Speaking to the marketing website, creative director Farrokh Madon supported the view that the ad was distasteful in equating data deprivation with starvation - which unnnecessarily "trivialises a serious issue".

Patrick Low, founder and creative partner at Goodfellas consultancy, however, had this to say: "We need to lighten up as a nation or risk becoming third world in our thinking."

The Clan Creative chief Casey Loh, echoed the view that the ad wasn't offensive, as "they used images of sad-looking Singaporeans , and not actual poverty-stricken children or old folks".

But he added that it may be wiser for agencies to stay away from sensitive issues such as this, if audiences aren't able to handle it.

As the saying goes - any publicity is good publicity, and if Circles.Life campaign's objective was to grab people's attention, well it certainly got it.