Bentley driver who forced his way into school: Case referred to Public Prosecutor 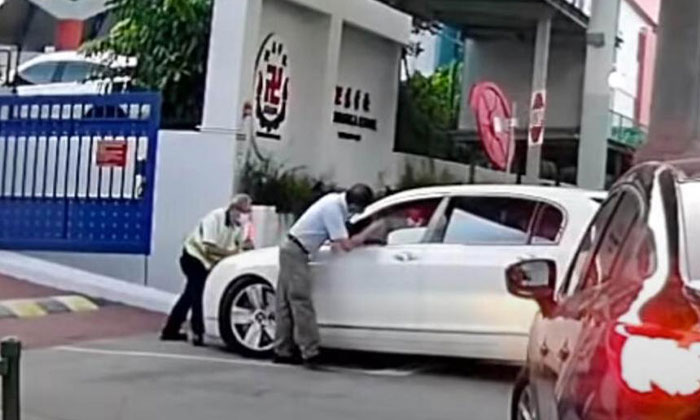 The police have completed their investigations into a 61-year-old Bentley driver who forced his way into Red Swastika School in Bedok North, and the case will be referred to the Public Prosecutor.

Home Affairs and Law Minister K. Shanmugam gave this update on the case in a written response to a parliamentary question on Monday (April 4).

He said the police have referred the matter to the Public Prosecutor "for a decision on the appropriate course of action".

The Attorney-General also serves as the Public Prosecutor in Singapore.

Mr Shanmugam was responding to a question filed by Nominated MP Raj Joshua Thomas, who had asked if there were any updates on the status of the investigation into the case. Mr Thomas is also president of the Security Association Singapore.

The incident, which took place on Jan 11, was captured on video and this was circulated on social media. In the video, the Bentley driver is seen inching his car forward a few times and pushing against a security officer despite efforts to stop the vehicle from entering the primary school.

The car was eventually allowed to enter the school.

The driver was later arrested and investigated for a possible offence of a rash act causing hurt.

The Union of Security Employees (USE) had in January identified the security officer as Mr Neo Ah Whatt, 62, with police saying he had sustained minor injuries.

USE general secretary Raymond Chin had told The Straits Times that Mr Neo had been deployed at the school for nearly three years.

Those found guilty of committing a rash act causing hurt can be jailed for up to a year and/or fined up to $5,000.