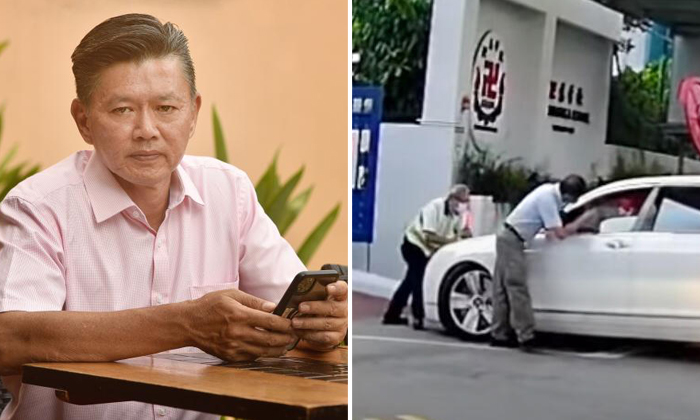 In the past three days, he has received about 200 calls and messages asking him if he was indeed the Bentley driver who tried to run down a school security guard.

Mr Neo Tiam Ting, 51, the director of car dealership ThinkOne, said his businesses and other organisations he is affiliated with have also been dragged into the matter.

But The Straits Times (ST) can confirm that this Mr Neo was not involved in the incident outside Red Swastika School on Tuesday (Jan 11).

He has been falsely accused of being the 61-year-old Bentley driver who was caught on video threatening to run down a security officer outside the school.

The actual man in the video has since been arrested for a rash act causing hurt.

Speaking to ST, Mr Neo, who has been a grassroots volunteer with Bukit Timah since 2008, said the false allegations had spread like wildfire on social media and through WhatsApp chat groups.

"Those who know me well know that the driver who was arrested is not me. But those who don't know me will likely believe those messages," said Mr Neo, who drives a Toyota Alphard.

"I can take the stress, but what about my businesses and family?"

The businessman has since made a police report regarding several posts and messages alleging he was the driver.

The posts had named Mr Neo, and included personal details and pictures of him.

They resulted in many false articles on unverified media sites, and rude comments from several netizens targeted at him.

A police spokesman confirmed that the report was lodged.

Mr Neo, a father of four, had also put up a Facebook post of his own addressing the allegations.

"I am aggrieved by these baseless allegations," he wrote.

"I wish to state categorically that I have nothing to do with the incident. I was not the driver. The vehicle does not belong to me."

Mr Neo added that his teenage children were upset that their father had been maligned, and that he was worried about how it would affect his businesses.

"There were a lot of messages going around, and it's like half of Singapore thinks I'm the one involved," he said.

"As a consumer, who would still want to do business or deal with someone like that?"

She said some friends and colleagues had shown her WhatsApp messages with the false allegations against Mr Neo, and stated that it was "completely untrue".

Asked what further action he intends to take, Mr Neo told ST that it would depend on the intentions of the ones who had started spreading the false allegations.

"If the ones who started accusing me were really mistaken that I was the one involved, then I hope he or she will come forward and apologise," he said.

"I don't think I've offended anyone, but if it is someone who has intentionally falsely accused me to hurt my businesses or reputation, then I think I will have to sue."

Criminal lawyer Joshua Tong of Kalco Law said the posts with the false allegations containing Mr Neo's personal details may be considered doxxing. Doxxing is the publication of personal information of a person to harass or threaten them.

"It probably falls under doxxing, but it's also harassment by way of threatening, insulting words or behaviour," Mr Tong said.

He said that those responsible may be looking at criminal charges with a possible jail term and fine.

Those convicted of publishing the personal information of a person with the intention to cause harassment, alarm or distress may be jailed for up to six months and fined $5,000.

The maximum penalties are doubled for repeat offenders.

Mr Tong added that Mr Neo could also seek recourse by asking for a protection order with a request for an expedited process, which may be granted within 48 to 72 hours.

"In the protection order, you can request social media platforms to remove all the posts," Mr Tong said.

"You can also apply for individual parties to remove them. But if it's viral, it's better to target the social media platforms."

But Mr Neo said he felt getting the posts removed instead of clarified would do little to help him.

"Even if the posts are removed, the damage has been done and people are still going to think I'm the one because they already read the false messages," he said.

"I am grateful to SMS Sim Ann, and I hope that more people will see her post so they know that I am innocent."