Bentley driver, 61, arrested after threatening to run down staff at Red Swastika School 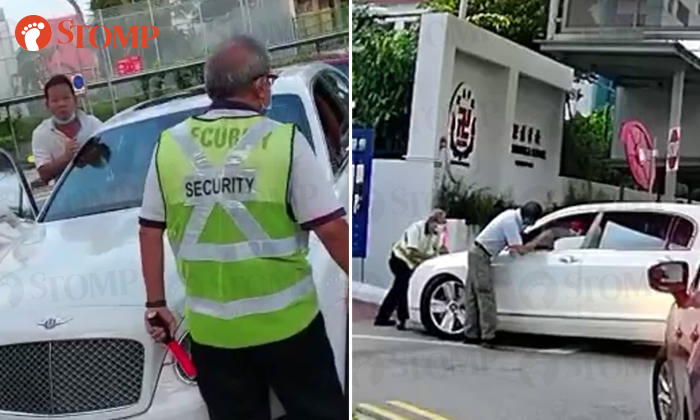 A 61-year-old driver has been arrested after he was caught on camera trying to force his way into a school and threatening to run down its staff on Tuesday morning (Jan 11).

Stomper Lenny shared a video of the incident that occurred at Red Swastika School at around 7.10am.

Lenny said: "A male driver, aged 50-60, driving a Bentley insisted on entering Red Swastika School without a valid car label and threatened to run down the security guard.

"He moved forward a few times to push the guard with his car and shouted until one of the teachers gave up and told the guard to let him in."

In a statement on Tuesday evening, the police said they were alerted to the incident at Bedok North Avenue 3 at around 11.40am.

The 61-year-old driver was arrested for rash act causing hurt.

In the video, a passenger from the Bentley can be seen arguing with another man who is believed to be a staff member of the school.

Meanwhile, the Bentley is seen inching forward despite a security guard standing right in front of it.

The passenger then gets back into the Bentley, which continues moving forward despite the staff member and the security guard trying to stop it.

The security guard can be seen being forced backwards and stumbling.

Traffic was apparently held up for around 15 minutes until the Bentley was allowed into the school.

Lenny, who said he was submitting the video on behalf of the person who captured it, added: "I feel that the driver is really disrespectful towards the school staff by insisting on driving in and inconsiderate to other parents who are dropping off their children. He is causing delays and inconvenience to other road users as well."

Education Minister Chan Chun Sing said in a Facebook post on Tuesday that he was aware of the video showing "a driver trying to enter a school and even using his car to engage in dangerous manoeuvres against a security officer and a school staff".

Calling this unacceptable behaviour, Mr Chan said his ministry will not hesitate to make a police report if warranted.

The minister added: "As adults, we should set a positive example for our children in how we treat others with respect, and abide by the rules that are in place for the collective security of our school community."

Union of Security Employees (USE) general secretary Raymond Chin, 39, told The Straits Times that the union is in contact with the security officer, who had been working with the school for close to three years.

Mr Chin said: "He said that his knee was painful and has been issued a three-day medical certificate after a medical checkup."

He added that the incident occurred at around 7.30am, which is the usual rush hour for parents to drop pupils off at the school.

Mr Tan told The Straits Times that the security officer had refused entry to the vehicle as it did not have a valid pass to enter the school.

"He had even gone to the extent of standing in front of the vehicle to prevent its entry as the driver refused to obey the instructions," said Mr Tan.

"The union is very disturbed by this case of physical abuse. It is particularly egregious given that a car was involved.

"There's quite a fair bit of anger from the community and on social media because of how the driver had endangered the security officer's life."

The union has since filed a police report on the incident.

Related Stories
Man pursues driver and hurls vulgarities after getting confronted for tailgating in carpark
Cyclist and driver hurl vulgarities (and water) during road rage dispute
Motorcyclist flashes middle finger at driver despite his own reckless behaviour
More About:
dispute
road rage
arrest