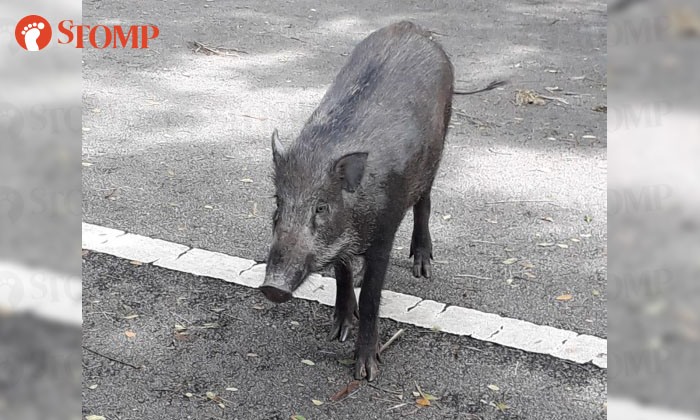 Stomper Ridha got a close-up look of one wild boar and saw a few others grazing at Cleantech Heights in the Pioneer vicinity on Oct 17 at about 12pm.

While resting in his vehicle, he said he saw a total of six wild boars and captured videos and pictures of them.

He was resting in his company's truck parked by the side of the road and was by an area with many bushes.

He then noticed six wild boars roaming freely in the open.

One of the boars approached his vehicle and looked at him.

He said: “It was about the same size as a goat and half of its body was covered in mud.”

In the video, the wild boars can be seen grazing and walking around.

He said that he had seen wild boars twice previously, at Pulau Ubin and Lorong Halus some time ago, but never this close.

“I was excited seeing the wild boar so up close. I think it might have been looking for a snack,” he added.

Related Stories
Man and son get upclose look at wild boar that's 'half the size of a car' in Punggol
Wild boars found trapped along Sime Road, trampling on each other and bashing against cage
These wild boars aren't shy about getting close to vehicles along Bukit Batok Road
More About:
wild boar
nature
animals