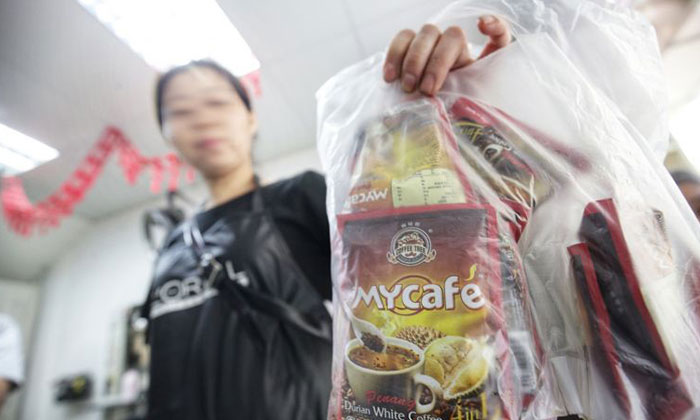 A brand of durian white coffee from Malaysia has been recalled by the Agri-Food & Veterinary Authority of Singapore (AVA), following reports of consumers falling ill after consumption.

In a statement by the AVA issued on Saturday night (Feb 3), it said that the recalling of Coffee Tree MyCafe 4-in-1 Penang Durian White Coffee serves as a precautionary measure while the case is still under investigation.

Samples will be retrieved for food safety tests, it said.

The AVA also added that consumers who had purchased the product may return them to the retailer.

Substances, believed to be drugs were detected in samples of the instant coffee mixture, said the Malaysia police.

George Town police chief Anuar Omar told The Star on Friday (Feb 2) that samples had been brought to the state food safety and quality laboratory for tests following a police report lodged by a medical officer.

ACP Anuar said that an office later confirmed that a substance, believed to be drugs, was found in the coffee powder.

The type of drug is yet to be identified.

This comes after five reported cases of people being admitted to hospitals after drinking coffee made from the sachets between Jan 27 and Jan 30.

In a Facebook post on Friday, the AVA said it has followed up with its Malaysian counterparts to request for information pertaining to the case.

"In general, consumers who do not feel well after consuming any food products should seek medical attention.

"As a good food safety practice, when in doubt of the safety of a food product, do not consume it.”

Mycafe Penang Durian White Coffee said in a statement on Friday that it believes that the packaging received from one victim had been ‘tampered’ with, and has lodged a police report.

Apparently, the victim was given a sachet of the coffee when visiting a temple. The victim’s friend also fell ill upon drinking coffee made from a sachet gotten from the same temple.

It also asked the public not to take coffee from strangers and advised them to get it from authorised dealers instead, adding:

“We wish to reiterate that we have given and shall continue to give full cooperation to all authorities in having this matter investigated and solved.”

According to The Straits Times, a check on five major Singapore-based online grocery stores, including FairPrice and Cold Storage shows that they do not carry the brand.