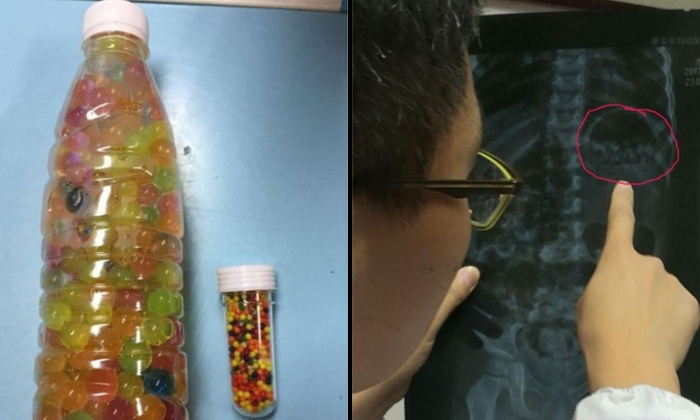 Looks can be deceiving, as a couple in Jiangsu, China, found out the hard way when they mistook superabsorbent polymer balls for sweets and fed them to their 3-year-old daughter.

The girl’s mother had reportedly agreed to buy sweets for her daughter when she went out to buy groceries on Feb 1, according to Yangtse Wanbao.

At the supermarket, she picked up several types of sweets, before noticing the polymer balls, better known as ‘water babies’, which looked similar to her daughter’s favourite colourful sweets.

Water babies are superabsorbent polymer balls that absorb and hold large amounts of water. They can expand up to 500% of their original mass when put in water, and are commonly used to supply water to plants.

Not knowing the difference, the mother purchased the ‘water babies’ and returned home, where she set about doing household chores. Her husband took over the task of feeding their daughter the ‘sweets’.

“He poured them into his palm and fed them to her by the handful,” the mother said.

Neither parent ate the sweets until their daughter had already finished the bottle. It was only when the mother picked up one of the sweets off the ground, wanting to give it a taste, that she realised that they were water babies.

Upon discovering their mistake, the couple immediately rushed their daughter to the hospital.

The total number of polymer balls ingested by the girl was unclear to both parents until the mother returned to the supermarket and bought another bottle. Much to their horror, they found that the bottle contained around 280 water babies.

After an X-ray was carried out on the girl, the couple found that their daughter’s stomach was filled with spherical objects. However, as they had been prompt in seeking medical treatment, the girl’s stomach was relatively unaffected.

Doctors put her on medication to expel the polymer balls. By Feb 4, she had expelled over 200 water babies, some of which had already begun to expand.