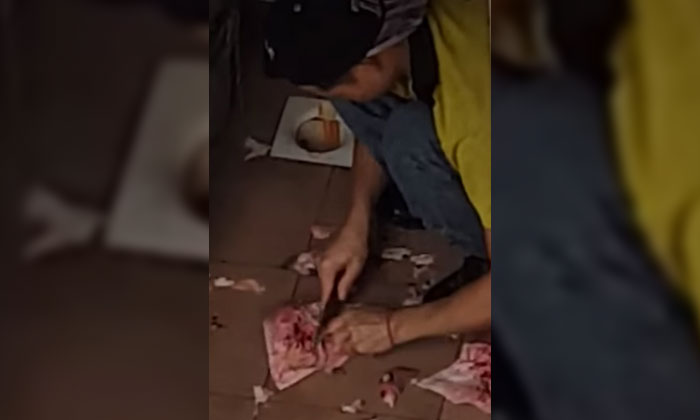 A stall assistant from a fish head steamboat stall in Bukit Panjang was captured on video descaling and cutting fish on the floor, prompting the owner to apologise for his worker’s conduct.

The 51-second-long video shows a man in a yellow uniform squatting on the floor as he sliced up pieces of fish with a small knife.

Scales and pieces of meat littered the floor.

“He cuts the fish on the floor, and then sells it to customers.”

Shin Min Daily News contacted the netizen who took the video, and he told reporters that he had done so as he felt that it was a breach of hygiene regulations.

"The surroundings were so dirty.

“Just watching it made me feel disgusted.”

Reporters visited the stall later and found that area where the worker had handled the fish was located at the back of the shop.

There were various bottles of condiments displayed, as well as a bucket full of unwashed dishes just outside the stall --- beside a rubbish collection point.

A spokesman for the shop, Mr Liu, 43, said that he was aware of the video and a regular patron had alerted him to it.

“It was a momentary lapse of judgement on the young worker’s part.

“I wish to apologise to all customers for his behaviour.”

He added that the shop has always taken food hygiene very seriously, and food handlers are required to wash all ingredients thoroughly.