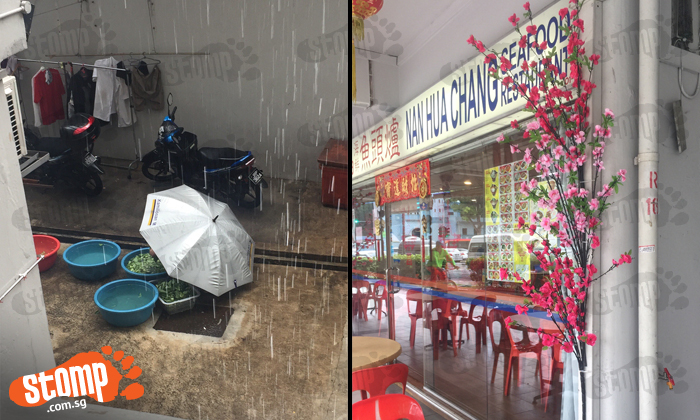 Stomper Steven was shocked to see a restaurant worker washing vegetables out in the pouring rain on Wednesday afternoon (Jan 25).

Steven was waiting for a restaurant along North Bridge Road to open for dinner when he saw a food handler from the restaurant squatting on a manhole. The worker was washing vegetables behind the restaurant, out in the open, even when it started raining.

In the video that Steven sent to Stomp, the food handler can be seen crouching under an umbrella and washing vegetables, despite the rainwater splashing into and mixing with the clean water.

Afterwards, the worker brings the vegetables back into the restaurant's kitchen.

“I don’t think it is allowed under NEA regulations to wash vegetables and prepare food outside the kitchen, especially when the food container is right next to the manhole. That isn’t hygienic at all.“

While Steven was originally planning to eat at the restaurant with his friend, he decided not to after seeing how the vegetables were prepared.

“I’ve eaten at the restaurant’s main outlet before, and their food was prepared in the kitchen.

“I won’t come back here, but I’ll still go back to the main outlet.”