Auntie jaywalks at Eu Tong Sen Street: Who's to blame if she gets knocked down? 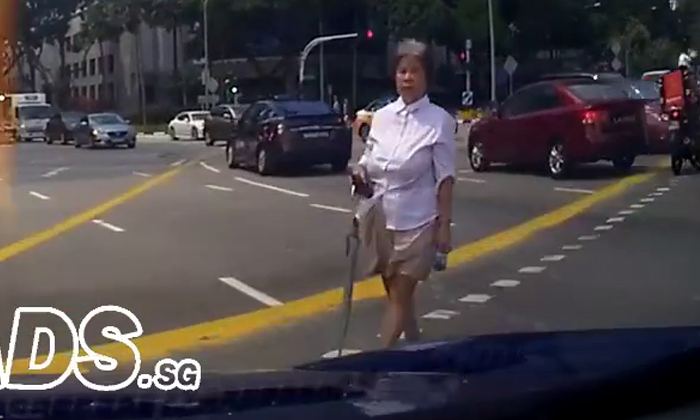 A video of an elderly woman jaywalking across the road has sparked a discussion on who should be held accountable in the event of an accident.

The incident occurred at around 11.10am on Saturday (March 9), according to a time-stamp on the video posted by ROADS.sg and credited to user Don Tong.

In the video, the woman can be seen crossing a road junction along Eu Tong Sen Street despite the traffic light not being in her favour. There was also oncoming traffic.

"Just wondering whether she is lucky or am I lucky on this day?" said Don.

The video has led to an online debate on whether pedestrians or motorists are to blame should an accident occur in such situations.

Others argued that both parties share equal responsibility when it comes to road safety, and that road users should always be alert and keep a lookout regardless of who has the right of way.

A few users also pointed out that the woman might be experiencing health problems or difficulties that led to her jaywalking.

"Let’s all road users, including pedestrians, watch out for frail people, young or old. Be patient with them," wrote one netizen.

Related Stories
Family with kids and baby in pram should know better than to cross road like that
Boy who dashed across road in Hougang 'might not be so lucky next time'
Jaywalker thinks he can run faster than car -- but gets knocked down instead
More About:
jaywalk
elderly
pedestrian