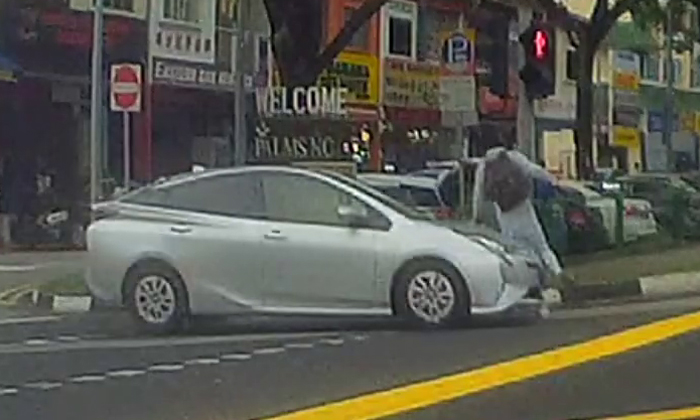 A jaywalker ran across the road, hoping to reach the pavement in time -- only to get knocked down by a car instead.

Facebook page ROADS.sg posted a video of the incident that occurred at the junction of Sembawang Road and Jalan Mata Ayer.

According to a time-stamp on the video, the incident took place last Friday (Jan 18) at about 3.57pm.

In the video, a male pedestrian can be spotted jaywalking.

Upon seeing an oncoming car, he ran towards the pavement, but could not reach it in time and was knocked down instead.

ROADS.sg wrote in its caption that the pedestrian "thought the car would stop".

It added: "The driver was also not paying attention to the front and the accident happened.

"Thank goodness it was not serious and both learnt a good lesson."

Related Stories
13-year-old girl sent flying after being hit by car is a warning to all jaywalkers
Female jaywalker hit by bike when running across road in Yishun, sent flying with motorcyclist
Mercedes driver hits jaywalker who ran across Thomson Road
More About:
pedestrian
jaywalk
accident