Arrested: Woman who cursed and spat at KFC employee after being told to wait for her order 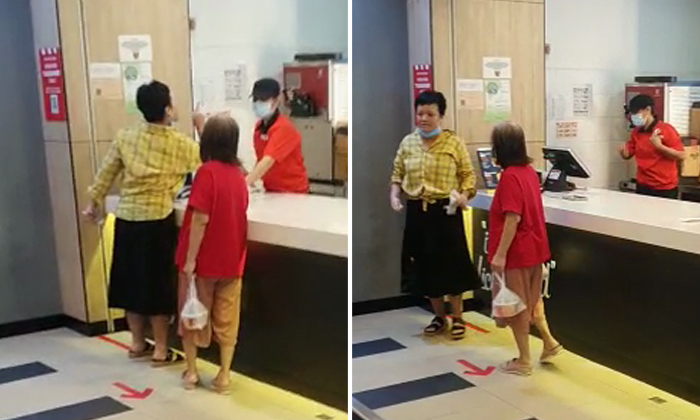 A 42-year-old woman who was caught on camera shouting and spitting at a KFC employee at Nex shopping mall on Wednesday (Apr 22) has been arrested for public nuisance.

A video that went viral online had shown the female customer cursing the KFC staff manager "to die" and spitting "Pui! Pui!" at her.

KFC Singapore earlier told Stomp that it had lodged a police report, as well as cleansed and sanitised the restaurant immediately after the incident.

In a statement, the police said they responded to a call for assistance at KFC's Nex outlet at 12.48pm on Wednesday.

"Investigations revealed that the woman had an argument with the service staff of the KFC outlet when she was told to wait for her order," added the police.

"The woman was unhappy with the wait and shouted and spat at the staff."

"When the police arrived, the woman had already left the KFC outlet."

Through follow-up investigations, officers from Ang Mo Kio Police Division established the woman's identity and arrested her on Friday.

The police, who are investigating the incident, said they are also looking at possible breaches of Covid-19 circuit breaker measures committed by the woman.

"The police take a serious view of such egregious and irresponsible behaviour, especially in the current Covid-19 situation," they said on Saturday.

"Everyone needs to play their part by being socially responsible, observe good personal hygiene, and be considerate to others, especially service staff who continue to serve and are putting in their best efforts to do so, during this difficult period."

Related Stories
Woman shouts and spits at KFC staff manager at Nex, police investigating public nuisance
GrabFood deliveryman in Burger King dispute shares his side of the story and the innocent photo that started it all
Playmade apologises to GrabFood rider arrested at Waterway Point: Staff told him it would be a 'f****** long wait'
More About:
dispute
arrest
Covid-19
spitting
disgusting
KFC