Playmade apologises to GrabFood rider arrested at Waterway Point: Staff told him it would be a 'f****** long wait' 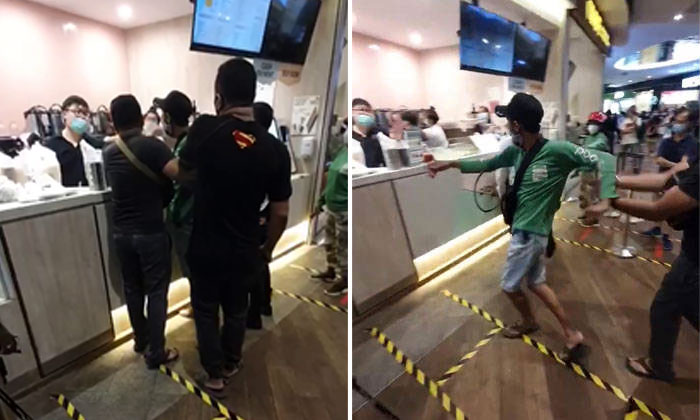 Bubble tea chain PlayMade has shared the events of what happened before a GrabFood rider was arrested after causing a scene outside its outlet at Waterway Point on Tuesday evening (Apr 21).

Stomp earlier reported the 38-year-old man was arrested for public nuisance after the police received a call for assistance at 9.39pm.

Several videos of the incident, where the man can be seen shouting at one of the shop's staff members, have been circulating online.

"Following the announcement of stricter circuit breaker measures yesterday requiring all bubble tea shops to be shut, our outlet at Waterway Point in Punggol Central saw a huge surge in demand both at the store and through our e-commerce platform with Grab.

"Our team worked tirelessly to serve customers who queued up at our outlet as well as placed orders online.

"At one point at around 8pm, our staff pressed the pause button on the Grab device to stop further online orders from coming in.

"During this hectic period, while long queues were building up at our store, a Grab driver expressed his impatience at one of our staff and repeatedly demanded to know how long he would have to wait.

"Under pressure and out of frustration, our staff responded that if he had to give an estimate, it would be “a f****** long” wait.

"The driver reacted angrily and asked our staff for an apology.

"Our staff and other colleagues apologised to him and several of them and other customers tried to defuse the situation.

"The video of the visibly upset Grab driver confronting and threatening our staff had gone viral on social media.

"Contrary to social media chatter,Playmade was not the party that reported the incident to the police.

"We have counseled our staff and he is in deep remorse over his uncouth choice of adjective.

"We and our staff sincerely apologise to the Grab driver, our customers and other Grab drivers who were inconvenienced by yesterday’s incident.

"Playmade remains very appreciative of all Grab drivers who are among the frontline heroes in our fight against Covid-19, putting their health at risk to deliver food and beverages to households all over Singapore during this challenging time.

"Post-circuit-breaker period, Playmade will continue to operate omnichannel customer touchpoints and delivery as we want to be able to offer timely service to our customers whenever they need it, wherever they may be."