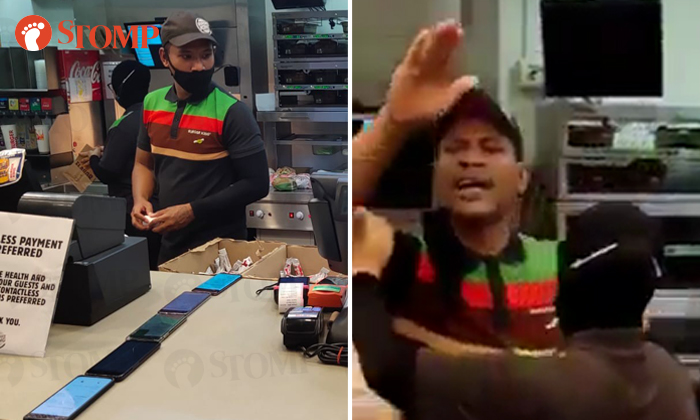 A GrabFood deliveryman who was caught on camera having a heated dispute with a Burger King employee has come forward to share his side of the story with Stomp.

It was earlier reported by Stomp that the incident took place at Burger King's AMK Hub outlet on Wednesday afternoon (Apr 22).

The 24-year-old Burger King employee was issued a $300 fine for removing his mask during the dispute, after police were alerted to the case of voluntarily causing hurt.

He has also been counselled by Burger King.

After the Stomp article was published, the 37-year-old GrabFood deliveryman reached out to tell his side of the story.

The deliveryman, who wanted to be known only as R.L, said: "I decided to share this here as I feel that Stomp is the only media who is neutral in reporting the incident.

"What happened before the video was that when I reached the restaurant and saw all the mobile phones on the counter, I knew something was wrong.

"I decided to cancel the order but Grab's call centre was busy, so I decided to take a photo and report it using their online help centre instead."

(A photo that R.L took to show all the mobile phones on the counter)

Unfortunately, that was when things started to go downhill and eventually culminated in the events captured on video.

R.L recounted: "The employee in the photo became agitated. He asked why I had taken his photo and started shouting at me, so I explained that I only wanted to photograph the phones.

"I said I could retake the picture if he wanted to be out of it but instead, he got out of control, started an argument and challenged me to a fight."

According to R.L, he only started to record a video to "protect himself" after the employee came out from behind the counter.

R.L explained: "This is because in Singapore, it is voluntarily causing hurt if one party beats another person, but if I fight back, it will be affray and not self-defense.

"The video started when the employee came out and wanted to fight me, so of course I said, 'Come la, everything is recorded, it will be a criminal offense if you dare lay a hand'.

"Only Stomp made it clear what both sides had said, including how the employee had asked me to make him viral and challenged me to take a photo of his face.

"After the employee challenged me to 'viral him', he hit my already injured hand. My old wound somehow cracked open again.

R.L, who has been with GrabFood for over a month, said he had previously worked for Deliveroo and Uber Eats as well.

He said: "I know the operating procedures very well, so I will never rush restaurant staff for my orders. All I needed was that one photo so that I could cancel the order, but the Burger King employee started yelling.

"Everyone is stressed, but please don't insult the delivery riders. The handling or approach could have been better.

"An example was how I waited for a fruit juice order for 40 minutes yesterday night. The boss of the shop apologised after I waited for 15 minutes and offered me a slice of watermelon.

"Initially, I did not want to accept it but he said that he would not be able to sell the fruit the next day anyway, so I eventually accepted.

"From my point of view, the approach is very important."

R.L also shared about how the Covid-19 outbreak has affected his daily life.

He told Stomp: "Before this Covid-19 saga, I was staying in Johor Bahru as I was facing some housing issues in Singapore. My wife is a foreigner so I couldn't buy or rent a place.

"I also have a 16-month-son and my baby girl was born just this morning.

"I had already sent my wife and son back to her parents in January as I was worried I might infect them if I kena Covid-19.

"Since March 18, I have been sleeping in my car due to Malaysia's lockdown. I am slogging 16 hours a day, with only four hours of rest and sleep daily."

R.L added: "I am sharing this not for sympathy but because despite being in a bad situation, I still work and try to pull through.

"Even though we are not the customers and are just deliverymen, it does not give anyone the right to insult or look down on us.

"If you cannot manage the surge of orders, log off the [Grab] platform. Don't throw your anger on us as when we reach the customer's place, some will also blame us for being late.

"I am not an angel but I do not want people to look down on me or insult me or vent their anger on me!"