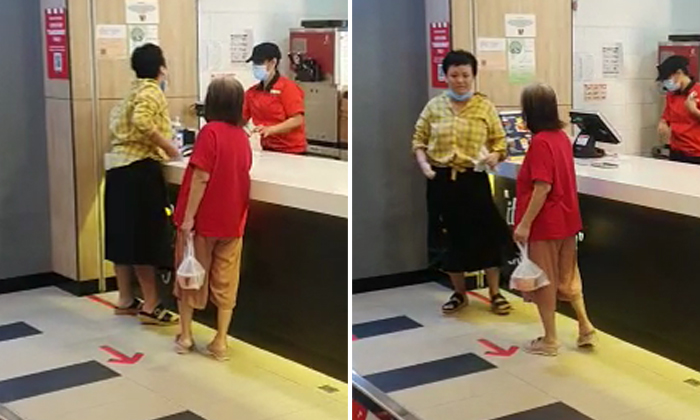 The police have confirmed that reports were lodged and said investigations into a case of public nuisance are ongoing.

Fast food chain KFC has lodged a police report following an incident where a customer shouted and spat at one of its employees.

The incident occurred on Wednesday (Apr 22) at Nex shopping mall.

Several Stompers alerted Stomp to a video of the incident that has gone viral online, garnering more than 15,000 Facebook shares in just seven hours.

In the video, a female customer can be seen yelling at a KFC employee across the counter.

The woman is heard screaming, "Nobody will scared!" and spitting at the employee, "Pui! Pui!" before walking away.

In response to Stomp queries, a spokesman for KFC confirmed that there was "an incident" between a customer and a staff manager at its Nex outlet.

The spokesman said: "Following this incident, we lodged a police report and will leave the police to investigate further.

"We would like to assure our customers that the outlet was immediately cleansed and sanitised post-incident."

The spokesman also said that KFC's top priority remains the welfare and safety of its employee, who is currently off-duty and resting.

"At KFC, we take the safety of our staff and customers seriously. We would like to remind all customers to maintain safe distancing and to wear a mask as required by the authorities," the spokesman told Stomp.

Related Stories
Playmade apologises to GrabFood rider arrested at Waterway Point: Staff told him it would be a 'f****** long wait'
Man loses temper at Texas Chicken staff due to long waiting time: "Go away, don't come near me!"
Man investigated by police for racist remarks and breach of Covid-19 circuit breaker measures
More About:
dispute
Covid-19