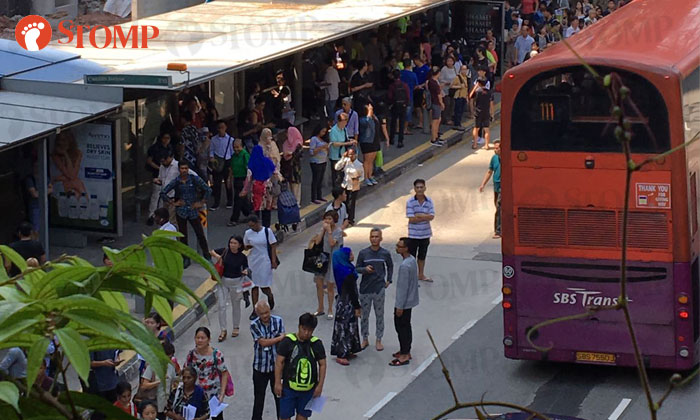 Train services were disrupted for around 30 minutes between Queenstown and Bugis MRT stations today (Jul 25) at around 11.30am.

Stomper Alif, an affected commuter, alerted Stomp to what happened.

In a telephone interview, he said that he arrived at Queenstown MRT Station at around 11.30am to take a train to Bugis.

Upon arrival, he was informed by station staff that there was no train service. Alif then decided to wait around the station.

Around 30 minutes later, he was informed that services have resumed, and boarded a train to his intended destination.

The commuter reported seeing a huge crowd waiting for buses outside Queenstown MRT Station between 11.30am and 12pm.

"This morning, the North-South and East-West Lines (NSEWL) experienced intermittent traction power tripping across the network.

"Engineers have traced the fault to a loose panel next to the tracks in the tunnel near Tiong Bahru MRT station. As engineers require track access to remove the panel, traction power needs to be turned off for safety.

"As such, there will be no train service between Queenstown and Bugis MRT stations in both directions on the East-West Line from 11.30am today. The operation is expected to take up to half an hour.

"Free regular bus services will be available from affected stations for commuters as alternative travel during this time. We are very sorry for the inconvenience."

At around 12pm, the rail operator tweeted that train services between Queenstown and Bugis MRT stations were 'progressively returning to normal'.

Trains ran at longer intervals this morning due to the intermittent power faults on the NSEWL.

Stomper Mark was affected by the delay and sent us photos showing the scene at Lakeside MRT Station at 7.30am.