Train service on North-South Line suspended due to signalling fault 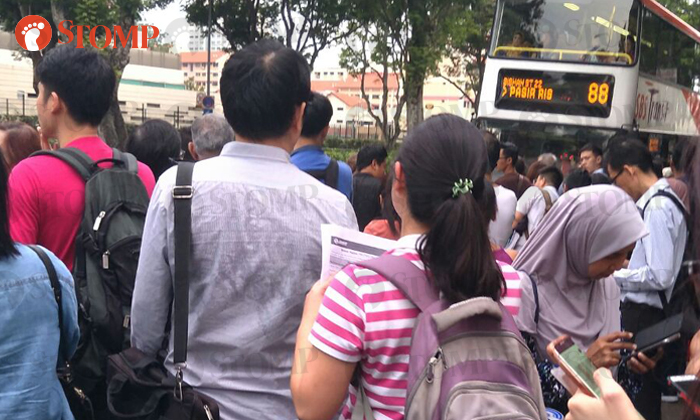 Train service on the North-South Line was suspended after signalling faults at around 5.30pm today (June 28).

Several Stompers were among the commuters affected by the delay and lamented about how they had to take the free bus services provided by SMRT instead.

At 5.46pm, the train operator tweeted that "train services along #NSL are progressively returning to normal" asked that commuters cater for an additional 15 minutes of travel time.

Stomper Iceberg, who had to alight at Orchard MRT station, cautioned others against taking the train "as the whole line has been terminated since 5pm".

"I'm now also forced to take the long journey by bus back to Serangoon," added the Stomper.

Stomper Gowrie told Stomp, "Really stressful. I am rushing to work. And I don't think I can make it.

"The buses that are coming are full. Full enough that the bus might just topple over. Not exaggerating."

According to The Straits Times, signalling issues had affected part of the East-West line between Joo Koon and Tuas Link as well.

Earlier today, commuters reported having to 'alight the train three times' after a delay on the East West Line from Pioneer to Tuas Link.

Watch the videos taken by Stomper Chee Kiang at Choa Chu Kang below.