'Angry unker' loses it, attacks car after getting honked at for anyhow crossing road 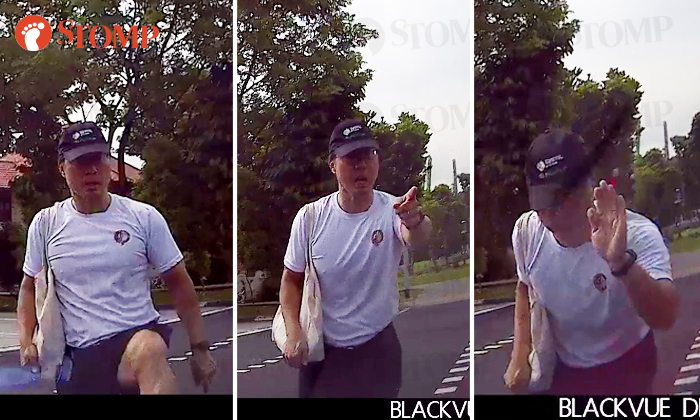 A man was caught on camera kicking and hitting a car whose driver had honked at him.

Stomper David shared dashcam footage of the incident that occurred at the junction of Pasir Panjang Road and Heng Mui Keng Terrace on Saturday (Nov 26), at around 10.39am.

"This unker decided to jaywalk, deliberately looked both ways before crossing, blocked the road when honked at, then hit my car and shouted angrily!"

In the video, the pedestrian can be seen crossing the road despite the traffic light not being in his favour.

He has an angry outburst upon getting honked at, and is seen making hand gestures and kicking David's car. A thud can also be heard when he hits the car with his hand.

David told Stomp: "The exact words that the man said could not be made out.

"I felt shocked that someone who would blatantly jaywalk could feel so entitled as to aggressively attack others when caught out being in the wrong. Thankfully, my vehicle was not damaged."