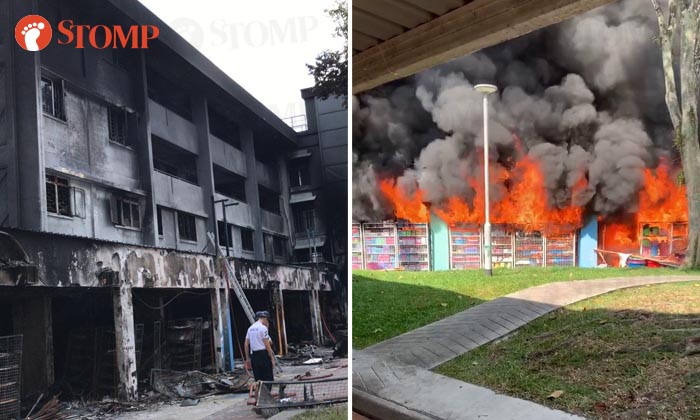 A huge fire that occurred at Block 720 Ang Mo Kio Avenue 6 left shopkeepers in a rut.

The fire that consumed several shops resulted in eight people, including a Singapore Civil Defence Force (SCDF) officer, injured. The SCDF officer was discharged from the hospital on Saturday (July 6).

Stompers Farris, Veon and Zanne shared with Stomp photos of the fire's aftermath

The photos show that the shops ravaged by the fire have been reduced to charred remains.

According to The Straits Times, four shops, including a paint shop and three others operated by retailer myCK, and the living spaces above were devastated by the fire.

Several shopkeepers in the same neighbourhood noticed a drop in business on Saturday.

Mr Leong Yong Huat told The Straits Times that Saturday was the worst business day ever for his foot reflexology centre, The Foot Pavilion. He lost about 50% of his usual business.

Leong said: "We are safe and we are lucky we can still open, but there is no phone line here, which means my customers cannot make bookings and can only pay with cash. Even when they walk in, they do not want to stay because there is no Wi-Fi."

The fire affected electricity and power supplies to the block and this also affected operations of Hair Journal, a salon next to the fire site.

According to Shin Min Daily News, the founder of myCK, Mr Hong, is still recovering from a massive fire that ravaged a six-storey CK departmental store at Tampines Street 92 three years ago.

Almost all of the items in the building were burnt to ashes in that incident. The organisation sustained losses of about $20 million.

The founder of myCK, Mr Hong said: "My employees contacted me when the fire happened. Even though the situation is different from the one that occurred three years ago, I was still deeply affected."

An anonymous friend of Hong told Shin Min that after the fire, 50 of his friends sent him messages of support and encouragement on WhatsApp.

In response to these messages, Hong said to them: "Life is full of change and this is something I accept. Thank you for all your concerns, CK is grateful! I'm starting to smile again, thank you all!"

"We have boarded up the four shops at Block 720 that were affected by the fire, so that further inspection and repair work can take place as soon as possible, and public safety is not compromised.

"The Town Council is also assisting to clean up the common area, and restoring the electrical and water supply to affected flats and shops."