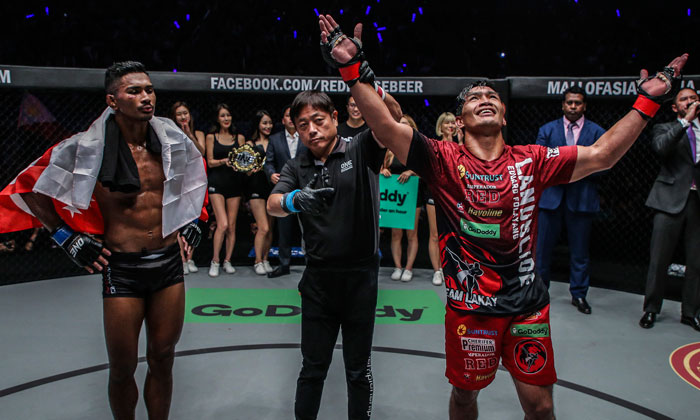 The 24-year-old took on Team Lakay veteran Eduard “Landslide” Folayang in a gruelling five-round affair in the co-main event of ONE: Conquest of Champions, which saw both men have their moments. In the end, however, it was Folayang who emerged victorious, taking home the prized world title belt.

Figuring in the first world title opportunity of his career, Khan started off looking to use his height and length to keep Folayang on the outside.

Khan, who owns the ONE Championship record of most knockouts at lightweight with eight, looked to make his power evident early on. But Folayang’s unorthodox striking techniques from his patented wushu stance proved difficult to decipher.

The second round saw Khan try to switch his strategy and attempt to bring matters to the ground. Folayang’s takedown defense however was on point, and the youngster found it increasingly difficult to fend off Folayang’s advances against the cage fence.

The momentum took a quick shift to Folayang’s favor when “Landslide” caught Khan off a missed flying knee attempt and slammed him to the mat. On top position, Folayang began to unload a series of downward punches that the Singaporean had trouble defending against.

It was a dominant performance from Folayang, who cruised to victory in the succeeding rounds behind his workmanlike activity and flashy offense. Khan tried his best to get the better of the Filipino champion, but failed to pin down Folayang’s timing. As a result, he was a step behind the entire match.

All three judges scored the bout in favor of Folayang to win by unanimous decision, crowning him the new ONE Lightweight World Champion.

“First of all, I would like to thank the lord God for teach my hands how to fight and who blessed me with victory,” Folayang told Mitch Chilson in the post-bout interview.

“I would also like to thank my team, who inspired me to win. We’re a family. I inspire them and they inspire me. Thank you to all who came out here tonight to show your support.”

In the main event of the evening, ONE Heavyweight World Champion Brandon “The Truth” Vera turned in a spectacular performance, stopping game but outclassed challenger Mauro “The Hammer” Cerilli with a well-placed left hook.

Vera spent two years away from competition to focus on his budding acting career, but returned to the ONE Championship cage looking like a new man.