'Aggro' cabby says he is god with master's degree, talks about being framed and supernatural power 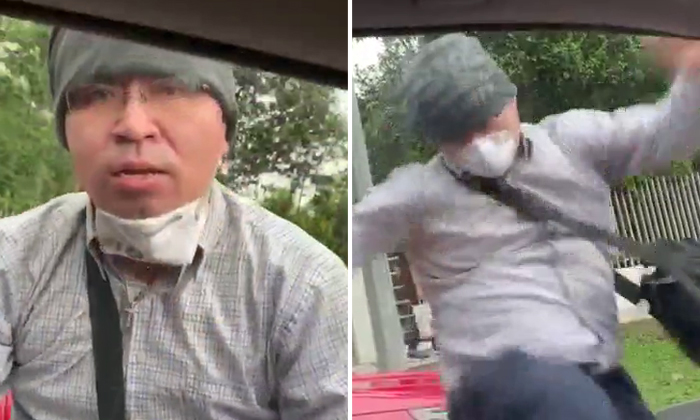 A taxi driver who was caught on camera behaving aggressively and hurling abuse in two separate incidents has given his side of the story in the most bizarre interview ever.

It was earlier reported by Stomp that the police had established the identity of the 42-year-old driver, who was involved in a case of road rage along Paterson Hill on Nov 22 as well as a case of criminal intimidation and voluntarily causing hurt at 14 Scotts Road on Nov 24.

A Trans-Cab spokesman also told Stomp: "The company had taken back the taxi on Nov 27 due to another service offence whereby the driver refuse to cooperate with us before the video footage started to circulate."

Netizens expressed outrage at the taxi driver's behaviour after videos of the two incidents went viral.

However, the taxi driver himself appears nonchalant about the online vitriol despite being the subject of hate comments.

On Monday (Dec 2), Feng Zhanning responded to queries by Lianhe Wanbao via text messages and provided his side of the story.

Regarding the road rage dispute along Paterson Hill, Feng said: "That driver was in front of me and swerving like a snake.

"He did this multiple times to block me deliberately and nearly caused an accident.

"I told him to get down from his vehicle but he refused and even took a video of me.

"I was similarly provoked in the other video."

Wanbao reported that during the process of communicating with Feng, it was evident that he had a different mindset from ordinary people.

For instance, Feng repeatedly emphasised that he had been enlightened about 'supernatural power' and 'high-dimensional physics'.

Proclaiming himself to be a god, Feng also claimed that he had been framed.

He told Wanbao: "Godly me has suffered 20 years of being framed by the mafia police and Institute of Mental Health (IMH), filling my heart with hatred."

After getting fired by Trans-Cab, Feng reportedly left Singapore. He said that he plans to return to China to live in seclusion and have a spiritual retreat for one to four years.

According to Feng, he is fluent in both English and Chinese.

He also said that he has a master's degree in science but was unable to continue his research work because someone had 'framed' him.

"The National University of Singapore once granted me a PhD entrance interview, but I didn't like it so I didn't attend," he added.

When asked further about his past and background, Feng responded: "Sorry, I'm not interested in answering personal questions."